… as we are, we tried to do something meaningful with Dane over the holidays. Possibly the best bit was finally getting up in the London Eye, which we’ve been talking about and meaning to do ever since we came over here. It was David’s birthday, so we wanted to combine something enjoyable for him with something enjoyable for Dane. They have a pretty good queuing system for the London Eye – first you queue for less than 1/2 hour to get your tickets. Then it says on the tickets, when you have to report back to another queue. After that it’s only another 1/2 hour. For us it was perfect – there was just time for a nice lunch a bit further down the river. Here are a couple of pictures – luckily it was sunny, but with ominous clouds, which lend quite some drama to the pictures.

Later on we wondered around London for a few hours. I wonder if I’m quite normal. The two shops in London, which I feel I soon know inside out are the Apple Store and Hamley’s. Shouldn’t it be Harrods and Selfridges? Or Waterstone’s?

But since inside photographs from those two shops would probably be rather dull, here’s a picture from an encounter Dane had with two nice, elderly gentlemen in New Bond Street. I wonder what they mean by that, “The Way Life Should Be”? Must be something with reddened leaves, fresh-cheeked youth, noisy snowmobiles and lobsters for dinner???

I’ve spent a good part of today in Freeport Community Library and it has been lovely. Outside it’s sunny but cool, and Dane and David are fishing. In here it’s quiet, comfy and… eh… bookish! Haven’t read a single page though, been busy on the computer.

Freeport probably wouldn’t exist if it hadn’t been for the extraordinarily well run and well stocked out-door department store L.L. Bean. We spent the best part of yesterday in there and got some good autumnal clothing for the three of us. David is now a record-holder in the number of fleeces owned by one person (who’s not a mountaineer).

I bet that stockholders in L. L. Bean have a lot to say in the town – it’s got the fiercest anti-sign-pollution policy I’ve come across over here. Look at this McDonalds: It looks so nice you’d almost consider going in there to eat! And the whole town looks like that. Real neat, as the Americans put it.

We think we’ve solved the Halloween problem I mentioned yesterday. We went for gas at a little gas station out in the woods. In there everybody were talking about baseball, baseball, baseball and then a little bit about Halloween. It turns out there are several public arrangements, so we’ll go for some of that and hope that the usual American friendliness will extend to our little Dane. Will tell you how it goes.

And so, don’t you want to know if the Red Sox won the game last night? I bet you don’t give a toss. But they did. They wiped out the Colorado Rockies 13 – 1. We’re already readying ourselves for the next game tonight. Can they do it again? 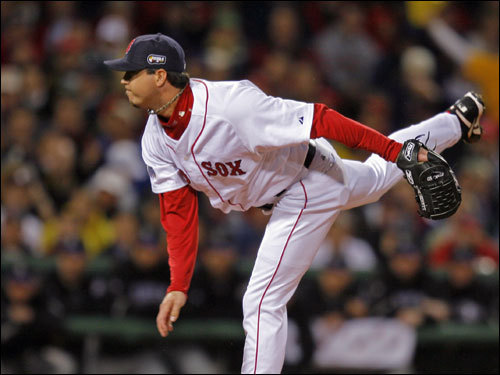 As some of you readers know, we’re travelling through the US in an RV for three months. Right now we’re in New England (right now, southern Maine), planning to see as much of it as we can, before it gets too cold. Then we’ll make a U-turn and go south again, this time a little bit inland. In a week’s time it’s Halloween and no child in America cannot know this. Every front yard, every house, every shop is full of orange. From lovely hand-carved pumpkins and nice autumnal decorations to awful plastic stuff and Halloween-packaged candy. We’d like 6-year-old Dane to experience Halloween in America – it’s a tradition that’s only now reaching Denmark, where Dane grew up. But how can we do that? We don’t know anybody here with children except the family in Texas and Louisiana, and they are too far away (we’ll be back there for Thanksgiving).

What can we do? Are there communities with arrangements throughout the day, so that Dane could get to know some children, before the actual Trick or Treating? I hesitate to buy him a costume, worrying that he’ll sit at some campground all dressed up, surrounded by retired people in big campers and being too timid to go trick or treating among them, all alone (or with Mom hovering in the background).