I’m so tired of seeing myself write “beautiful”, that I’ve promised myself not to use that word while describing the Niagara Falls. My thesaurus gives me (among many more, of which many are totally inappropriate) these alternatives: attractive, pretty, alluring, lovely, delightful, gorgeous, stunning, arresting, beguiling, exquisite, magnificent, drop-dead-gorgeous, devine… 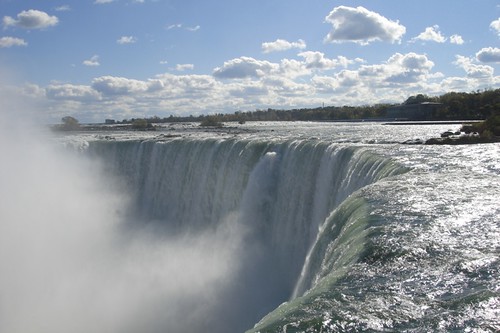 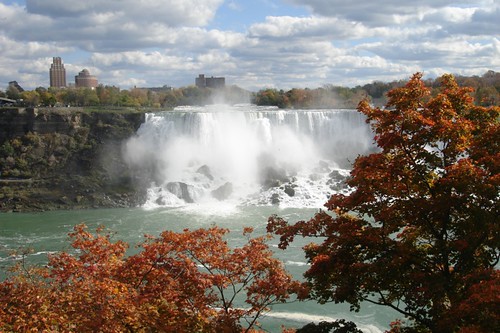 We got up early and were at the falls around nine. The weather forecast the evening before had not been uplifting, it promised severe winds. But we were so lucky. The severe winds came during the night and really rocked the RV , so we woke up several times. But in the morning it was all over, and the sun was shining from a blue sky. We started on the American side which is the “less fantastic”, our guidebooks informed us. That was true – the view from the Canadian side is much more stunning. The two photos above are both taken from the Canadian side, the top picture is of the so-called horse shoe fall. I never understood why they call it that till I actually stood there. Guess what, it’s shaped as a horse shoe…

A rather strange thing is that it’s the Canadian side that’s the over-commercialized one. On the US side the falls are in a state park and it’s all very neat and there’s just one souvenir shop, the same kind as you find in all state parks. On the Canadian side it’s all glaring commercialism in ghastly colours (casinos, chain hotels, huge adverts, souvenir shops etc.). Luckily your back is to the glare when you’re looking at the falls. So the funny thing was that this probably was the cheapest touristy thing we’ve done yet – even the parking was free (but that was because the meter was broken). We had lunch in Canada in a restaurant that would’ve been absolutely terrible in the high season. Today there were only a few people in there and we could choose a table by the window and eat our sushi (so many Japanese tourists) with a view of the falls. We crossed the Rainbow bridge to Canada on foot, since the RV cannot leave the US. That was fine – it was only a short walk and it was much easier to find parking on the US side. And the customs officers on both sides were nice and polite – a novelty after the ones in the airports who all seem to suspect you of harbouring terrorist sympathies. 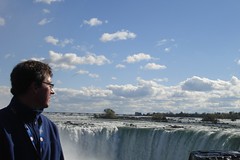 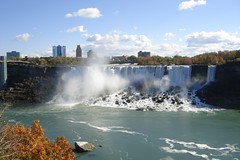 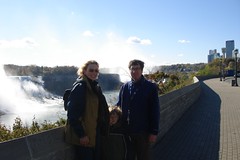 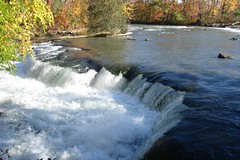 At two we were on the road again, still heading west. So now we’re in Ohio, although still on Lake Erie. We were lucky and found another open campground – right by the lake. 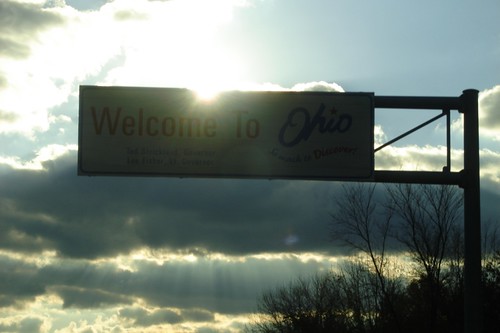 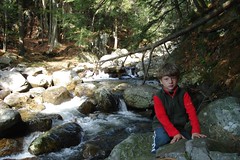 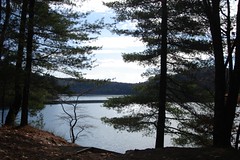 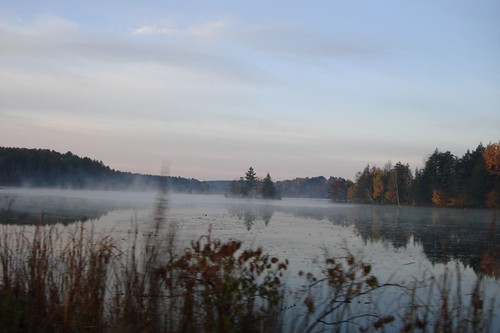 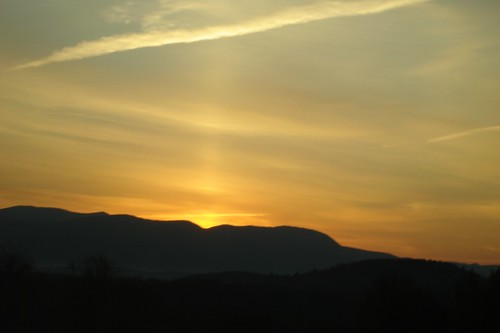 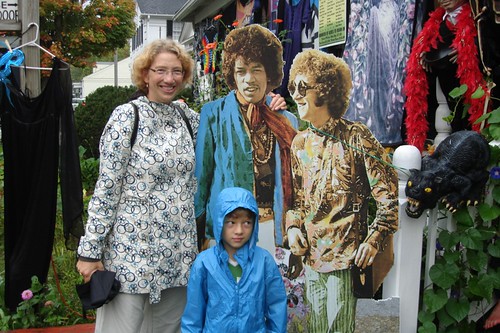 Yes, you guessed it! Or you didn’t? Then it’s just because you’re too young (like us, ha ha) or too old. We’re in Woodstock, N.Y. A place that seems to have revived itself as a center for spiritualism, a refuge for old hippies (I’ve NEVER seen so many in one place, not even at Roskilde Festival) and a center for hip photo galleries, a film festival for independent films etc. Quite well done! Surely, there are tourist traps with loads of hippie-stuff and we fell for it all. The clothes we were wearing that day still smell of patchouli… 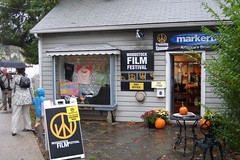 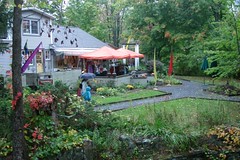 As you can gather from the pictures, the weather changed rather abruptly. The temperature dropped a lot and it rained all night and most of the days we spent in New York State. But we still enjoyed our visit to Woodstock!

Today, in Massachusetts, it’s beautiful, high blue sky, no wind and around 14 degrees Celcius. But brrrrr, it’s cold at night! We’ve bought Dane a sleeping bag and extra blankets for us. And told Emil to bring his sleeping bag from Denmark. If you think we’re without heating in our RV, think again. We have a furnace, which runs on propane gas. Apart from being noisy – but not as noisy as the aircondition – it works fine. It’s just that that kind of heat isn’t very sleep inducing, so we prefer not to have it on so much.

We haven’t got the ultimate picture of the autumn colouring here in New England yet, but the weather forecast is very promising, so come by again tomorrow! It is exactly as beautiful as everybody had told us it would be – and the New England towns we’ve passed on our way to this evening’s campsite were all quite lovely. We passed another Whole Foods supermarket, where we’ll shop tomorrow for the first days with Emil. He’ll probably be real disappointed with all that lovely, wholesome, healthy food – he’s been looking forward to eating junk food for a week!