Not finding inspiration and time to write here is probably a downside of being on Twitter with incredibly talented writers, often able to express something profound in 140 characters. And also having Twitter as a daily outlet for speculations, wonder and anger over things that pass in the world. But I’ll try to up my presence here – not least because I want to get back into the good habit of writing something – almost anything – every day.

For an easy start I’ll publish the recipe for Danish meatballs, Frikadeller, as recklessly promised on Twitter a few days ago. It’s slightly adapted from my favourite Danish cookbook writer Camilla Plum’s version:

To feed four hungry people or six less hungry ones: 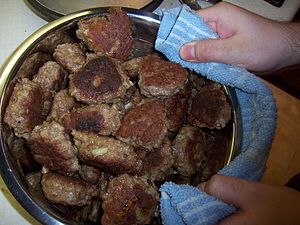 1 big or 2 small onions, grated or whizzed in food processor (the smaller the children, the more whizzing needed)

A sprinkling of thyme or other dried Mediterranean herbs. Must NOT be overpowering.

Put mince in mixer with salt and mix for at least 10 minutes. This is important, as it changes structure of mince and makes it easier to fry later. Same goes for beef patties btw. Add the rest of the ingredients and mix some more. Consistency must be so you can easily form “frikadeller” with a spoon, i.e. fairly moist. Add more milk if necessary.

Fry in BUTTER and plenty of it. If you don’t want to use butter, don’t bother. Frikadeller fried in substitute or – even worse – oil are no good. Which is one of the reasons I only make them once a year or so.

Use a normal tablespoon to avoid the frikadeller becoming too big. Dip it in the melted butter before starting on the mixture, thus avoiding it sticking to the spoon.

Fry at medium heat till nice and brown on both sides. It takes a while. Don’t fill the frying pan up, there must be some space between the meatballs. When you add a little pressure to a meatball and it “feels like rubber”, it’s done. If it’s soft, needs more cooking.

Serving suggestion: Potatoes and parsnips, cubed and cooked in oven for 20-30 minutes and The Quickest & Nicest Way to Eat Cauliflower: Separate cauliflower florets and blanche quickly in boiling, salted water. Drain. Mix 3-4 tbsp tomato puree with 1 tbsp olive oil, 1 tbsp sesame seeds and 1 tsp cumin seeds and 1/2 salted lemon. If no salted lemons around, choose pickled or nothing. Add florets and mix well. Spread out on baking sheet and cook in oven with the potatoes for the last 15-20 minutes. This is also adapted from Ms. Plum’s recipe.

Only downside about this combo is the colouring – all sort of reddish brown. So maybe add some mange tout or a wee bit of salad on the side.

Wikipedia’s entry on Frikadeller is quite entertaining. I giggle over the way even the most profane things have their own entry.