Tech news of the day

In Washington Post about viruses on social networking sites. It’s a very sober article, telling us the facts about the current viruses out there, how to spot them, how to avoid them:

It’s important to note that practicing basic online street smarts can save you from falling for these types of attacks, regardless of the medium. As always, be extremely cautious about clicking on links in unsolicited messages, even if they appear to have been sent by a friend or acquaintance. Also, don’t install applications or programs if you didn’t go looking for them. Before you install anything, take a few minutes to research the program and its vendor first. If you decide to install the application, make sure to download it directly from the vendor’s Web site, if possible.

– waste of time set aside, this is a good a reason as any to avoid all the silly applications on Facebook. I’ve kept just one and that’s because it’s been developed by a friend of mine, so I trust it. 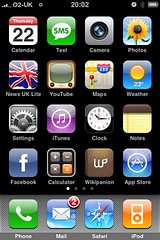 Haven't installed the app yet!

Also in Washington Post about a cool app for the Iphone, the kind you wish you’ll never have to use. At a calm moment in your home you record all details about your car, insurance etc. And then, if you’re in an accident, you can report it to the insurance company with details like photos of the wreckage etc. in seconds.

Wired has the story about Flickr now opening up for videos, even in HD, also for the non-paying members.

Guardian Tech tells that Yelp has launched for London. It’s a review site like so many others, but this has apparently worked really well in the US. At a cursory glance it looks good. Worth checking out if you’re going I’m sure. We go there so relatively rarely that I still feel so totally like a tourist – map in hand 50% of the time…

Finally a tip from down under. I’ve started following this entertaining blog, which has such a cool take on its two subjects, economy & children. He really knows how to mix those two things in new and entertaining ways! He also Twitters and a few days ago Twittered about a math site for children called Mathletics, which he recommended. I checked it out and now I’ve purchased it for Dane. We just did an hour and he won his first certificate. Not only is this a fairly cool way of learning stuff that could otherwise be boring (it responds intelligently to you getting a question wrong and goes back and gives you an easier one or one with more help), you can also play against other children around the globe. For me specifically I finally get a glimpse of the curriculum for his year and I can tell you, I breathe much easier now!

Oh, and then this one which isn’t techie at all, but still lovely news. Bryan Appleyard has good news, namely that pundits get it wrong 66% of the time. I’m sure that’s more than me :-D    and more than the flip of a coin.

forrigeCompletely unrelated…
næsteDecision making – or when we think we're making one…