With one friend I went for a walk here: 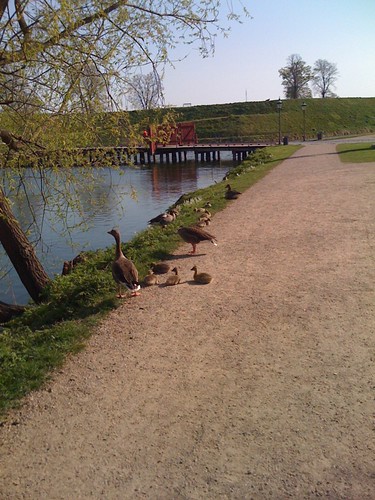 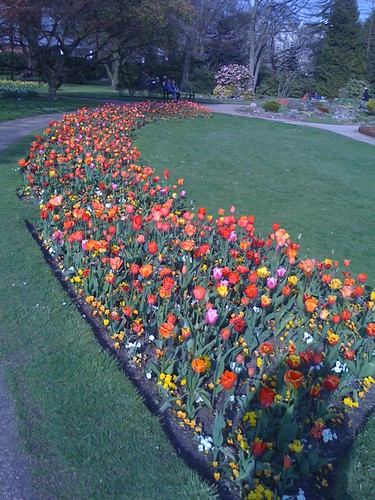 and I visited more cafés and restaurants in one week than ever before in my home town.

I’d like to tell you about my wonderful friends, but they are generally not as exhibitionistic as I am and would probably rather stay off-camera, so to speak. So I’ll just tell you that I’ve probably got the best friends in the world and that it was a marvellous experience to spend intense time with them all, in the span of little more than a week.

The cafés and restaurants I can talk about, and I will:

Brunch at Dan Turèll in St. Regnegade. You can always count on café Dan Turèll! Actually, when Uncle Danny was alive you could count on him too. He might have seemed rather flippant, but he always kept an appointment and was well prepared and on time. At least when I dealt with him (in the prehistoric times when I was in the music biz).

Dinner with Emil at Sticks’n’Sushi, Gl. Kongevej. The decor was some of the most original and beautiful I’ve seen in a restaurant.

Sticks’n’Sushi back room. Picture taken from their homepage.

The food was excellent and matched the price.

Brunch at Emmery’s in Hellerup. The food is top quality, but the service isn’t. When I pay more than 40 dkr for a cup of coffee, I expect the service to be friendly and impeccable, which it wasn’t. And I expect the toilets to be spotlessly clean and have both hand towels and toilet paper. I was there three times in one week and each time one or more of the toilets lacked one or two of these things.

Dinner at Wagamama. The food was good as it generally is at Wagamama (tried one in London, one in Brisbane, one in Sydney and one in Sydney airport), but the service rather helter skelter. Generally, it’s problematic when several waiters serve the same table. The same problem seemed to occur at above mentioned Emmery’s.

Morning coffee at Kafferiet on Esplanaden. Has been one of my all time favourite coffee shops since Dane was a baby and I walked the pram on Kastellet every day. Still lovely and very recommendable.

Picture borrowed from Kafferiet’s homepage. Check that out by the way. Very original!

Tea & cake at Tante T in Victoriagade on Vesterbro. Very nice but very crowded place. Would like to come there when there are fewer people. Wonder when that is?

Lunch on the noisy but wonderfully sunny sidewalk outside Björg’s on Vester Voldgade. Not all that interesting, but fair enough at the price.

Lunch at Sommersko. Rather like Dan Turèll, dependable. The potatoe wedges were great.

While waiting for David and Dane to arrive from England, I went to the Grand cinema and saw an

absolutely wonderful Swedish film by Simon Staho: Himlens Hjärta. If you’re in a relationship or if you ever intend to commit yourself to one, go see this film. It’s like a lighter, updated version of Ingmar Bergmann’s Scener fra et Ægteskab. Since I first saw him in a film, I’ve been a fan of Mikael Persbrandt. He’s one of those actors who always burns through the screen. Although he denies it, he seems to have had some sort of problems (very likely involving alcohol) for a period of time, because now he looks slim and fit and a good deal better than last time I saw him in a film. I snatched the picture at salongk.se.

Breakfast at Kenya Kaffesalon on Strandvejen in Hellerup. Nice little place with free wi-fi. We always appreciate that!

Family lunch at Brede Gamle Spisehus. Unfortunately the weather was not on our side, so we couldn’t go for a walk in the beautiful surroundings. Brede Gamle Spisehus was always nice, but seems to be living a little too much off their reputation. Neither this time nor the last time we were there, did the food quite live up to former standards. At first we had a very nice and  very attentive waiter, but then he was replaced by two women of which the eldest apparently was the owner’s wife. She wasn’t very nice and they both kept forgetting our orders. Rather irritating!

Coffee at Hacienda in Ørstedsparken. When the sun is shining, this is the ultimate place for advanced people watching. We spent hours there and among many characters met this charming fellow, who promoted himself and Save the Children at the same time.

Dinner at Don Don’s. OK – but no more than that. I strongly disapprove of having my dinner served on plastic when I’m actually eating in a restaurant. I would guess that all that plastic leaves more of a carbon footprint than the washing up of plates does?

Now we’re back in England and Dane has started school. So far, he likes it!

PS: Just discovered that somebody has immortalized me by making an entry about me on Wikipedia. Beat that! Wouldn’t it be nice though, if it weren’t for past achievements but for something I’d done/written lately? Anyway, it’s funny and not entirely correct!