Ever since we got a fixed address, we’ve been busy checking schools on the Internet and phoning good schools in the area (and outside the area). We’ve based out search on the so-called Ofsted Reports and on word-of-mouth. A member of the family is a school teacher herself, which has helped an awful lot.

But – it’s difficult to get a place at any of the good schools, some of them even have long waiting lists. In the end we were lucky. It’s called Ripley Church of England Infant School, a tiny school, only ten minutes away. Until now it’s been a so-called Infant School, taking children from 4 – 7. But from next year they’ll become what’s called a Primary School and will take the children up till they are 11. Dane will be starting in year 2, so will join what is at the moment the oldest class in the school.

He’ll have a tough time to begin with, not reading or writing. But the lovely headmistress was complete untroubled by this. She’s certain he’ll have caught of with the rest of the class by the beginning of the next school year. Great comfort!

So we’ve been out buying school uniform for Dane today. He’s been wearing it ever since and can’t wait to start. 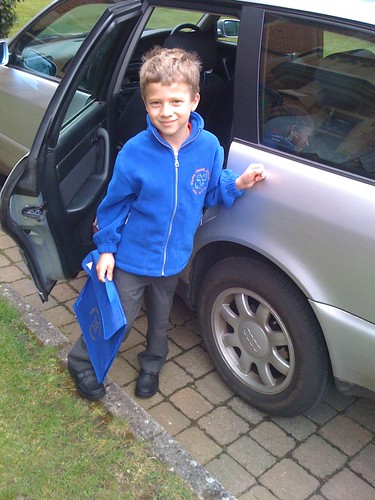 However, it’ll be another week and a half, since we’re coming to Denmark. I’m coming tomorrow, Saturday, and Dane and David will follow next week.

So expect very little activity on the blog – if any. I’m not bringing my computer, but instead my new toy, my Iphone…