Today we witnessed a puzzling drama as it unfolded under our windows, out on the bay. It is an extremely stormy day, the metereologists say it’s the worst storm in the Bay area in many years, so we wondered what a relatively large fishing boat was doing, anchored right off the coast in this part of the bay, where we haven’t hitherto seen any larger boats. 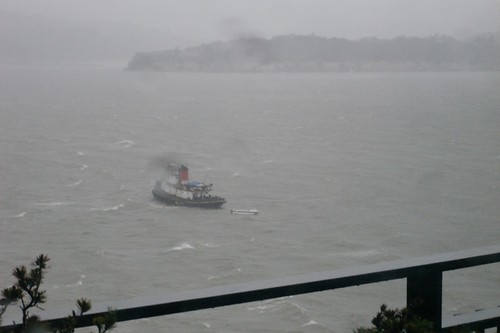 Through the binoculars we saw that two men were working on the ropes that held their dingy. After a while the dingy got away and we looked on in astonishment as one of the men dived into the sea and tried to swim after it. But it was already far gone, and he swam back and was pulled back on board by his mate.

But then they went up to the upper deck and got a canoe, which they launched into the water and the guy got into it and started paddling after the dingy (which was by now out of sight) with one big, long oar. The winds were up to 70 mph. After a few hundred yards he capsized and we could just see him clinging to the bottom of the canoe. David rang 911, but luckily they had already got a call and were on the way.

David and Dane got in the car and drove down to the bottom of the bay where they witnessed the rescue. At first nobody could see him, but then Dane and another by-stander spotted him and the two rescue vessels went to the rescue. On the last photograph you can see him being pulled to shore. 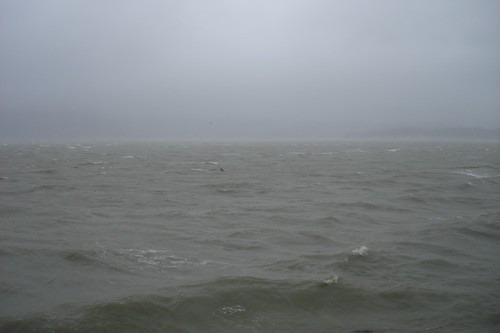 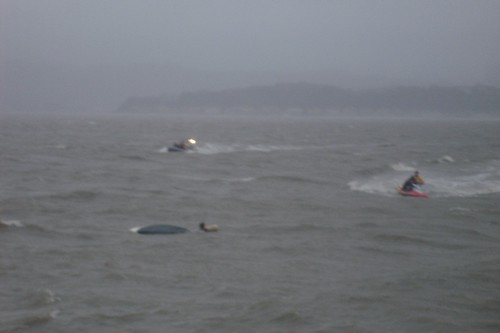 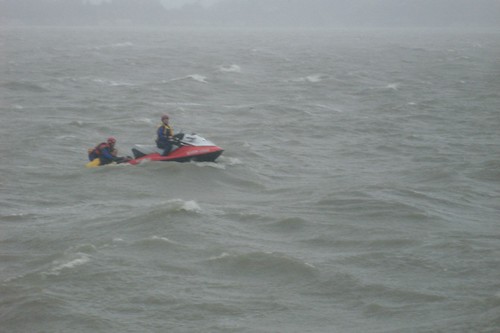 It was such a weird thing to witness first-hand and the weather was so crazy, that David’s glasses flew off. So now he’s wearing sun-glasses… They were both soaked to the skin, when they got back, in spite of all their rain gear.

Quite a few sailing boats are drifting around in the bay and have been blown onto the shore after having lost their anchors, I guess. The garden furniture was skating around on the porch and we were a bit worried about the trees. But they were the bending kind!

We’re pretending it’s Emils birthday today (it’s really in two weeks’ time), so he could decide where we’re going to eat. He chose a sushi restaurant in Mill Valley, but when we got there, the whole valley was without power. We saw many fallen trees along the way. So now we’re back in Tiburon, where there’s also a sushi restaurant and where there’s power. We were lucky not loose electricity at the house, we understand, because many thousands of houses in the bay area are without power since the storm, which has now almost died down.

This evening the above story appeared on the local paper’s website. Clearly the other guy had chosen to modify what happened in his explanation to the police. Of course, had he admitted that the guy first jumped and then sailed out in a canoe without vest or wet-suit in 70 mph winds, he might be facing charges!?!

I just read that the man died. He went into cardiac arrest when he was brought to shore, and in spite of a massive effort to bring him back to life, he was taken off life support yesterday. That is very, very sad. And particularly when his death was so utterly unnecessary. My thoughts go to his family and friends.