Here, where I am, the sun peaks out now and then and there’s that smell, you know, of earth outside. And I found a few snowdrops, just outside our front door! 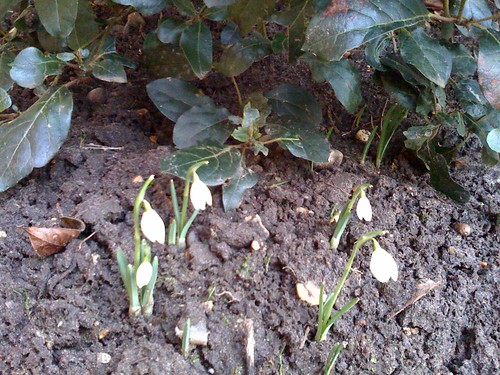 In Davos the sun has also been out and one of my favourite BBC reporters, their financial guy Robert Peston has interviewed Richard Branson. Branson is virtually brimming with optimism! I couldn’t embed this video, but just click here.The clip is 5 minutes long.

This article (also BBC) describes one of the “secret” meetings in Davos, where some of the economists who’ve been predicting this crisis for quite a while were gathered. The interesting bit of course was to hear if they had any predictions as to the length and gravity of the crisis. Nothing super-soothing, but they did agree that the crisis will not deepen into a depression like the one in the 30ties with unemployment rates around 25%. They attribute this to the governmental packages, which I wrote about yesterday.

These economists (Crunch Cassandras, as the BBC so charmingly has named them) who turned out to have well functioning crystal balls are quite interesting. One of them has written a book, which I’ve had on my Amazon wishlist for quite a while. Now I’ve moved it up in the world – into my shopping basket… Nassim Taleb is his name, the book is called The Black Swan. His homepage is highly unusual and well worth a visit.

Nouriel Roubini, an economics professor at New York University, has been preaching gloom for years and has suffered ridicule among his peers. One might say that this year’s Davos is his vindication. The last of the three is a controversial historian, Niall Ferguson. I don’t quite know what to make of him…

Well, enough economy, cake baking next. It’s Friday is it not?