We didn’t really like it much in Las Vegas. My brother liked it more, but then he had friends there. Our last night together was really nice though, with a lovely meal at Mesa’s grill in Caesar’s Palace and two views of the great fountain show at the Bellagio. 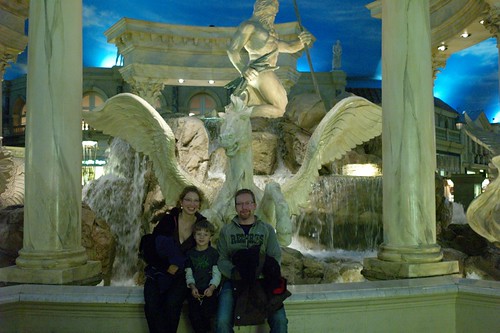 The following morning we got up early and drove east towards Grand Canyon. It was a long drive past the 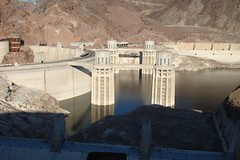 Hoover Dam and through the Mojave Desert. All the northern slopes were covered in snow and the closer we got to the canyon, the more snow and the more the temperature dropped. We had quite a scare on the way, because we discovered that we’d forgotten – or really didn’t know or thought about – the time difference between Nevada and Arizona. The GPS claimed that there was a two hour difference, which would have meant that we’d miss our paid-for helicopter ride over the Canyon. Luckily the GPS was wrong (something with daylight saving preferences) and the difference was only one hour.

We only had a few hours there, because the drive is almost 5 hours each way. We made the most of those hours, taking a short peak at the Canyon from the rim and then driving to the helipad. The ride was half an hour, which was quite enough for Dane and me, who both got a touch of motion sickness. Also Dane was squeezed in between David and another grown man, and contrary to what we’d expected, it was very hot in there. 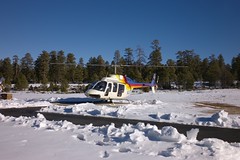 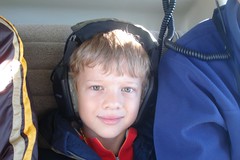 As you can imagine it was a spectacular sight. We’ll let the pictures speak for themselves. 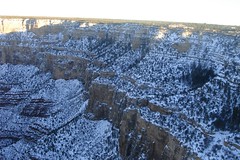 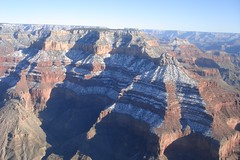 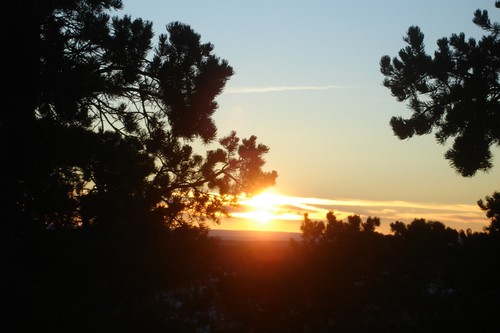 After the helicopter ride we went back to the rim and drove along it to catch the sunset. Just after sunset we met a flock of elk cows who really loved having their photographs taken. 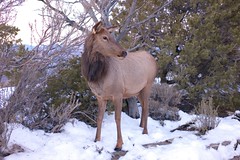 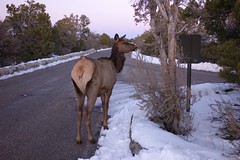 We were exhausted when we got back to Vegas and the next morning we were off to Costa Rica. We arrived there in the evening and caught a shuttle bus to the completely non-descript hotel Best Western Irazu. The rooms were clean and everything was fine, but the hotel restaurant was a Denny’s, a very bad American fast food chain that we had successfully avoided in four months in the US. The local restaurants in the area were all closed and we were terribly hungry, so we really didn’t have a choice. And David had what was probably the worst steak in the whole of the world. It neither tasted nor had the consistency of meat. It looked a little bit like meat though… 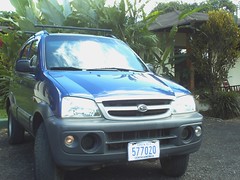 The next morning we got our rental car, a tired old 4×4. But it works. We drove 5 or 6 hours to our first destination, the lovely hotel Arenal Paraiso (if you have Explorer, you can see the hotel’s own homepage here) where every room has a view of the very active volcano Arenal. Just spectacular!!