When we left New Orleans in September we vowed to come back towards the end of our trip. At that time it was difficult to say whether we were crazy about the place because we’d just arrived in the South and everything was new and exotic, or if the city really was as special as we thought at the time. And after 22 states – yes, it really is that special! 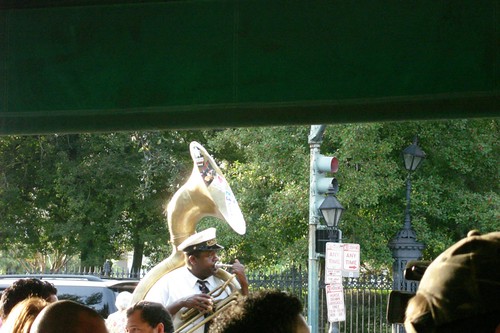 We decided to try out some very touristy things, because our trusted guide book recommended it and because Dane really wanted to. So on our first day, we went on a two hour river cruise on the Steamboat Natchez. A very lovely experience that didn’t feel like a rip-off at all. The Mississippi really is mighty and sailing on her was something special. And on a steamboat. Even if that steamboat was only built in 1978. You should have heard the steampipe organ. It is WAY beyond description! 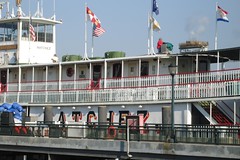 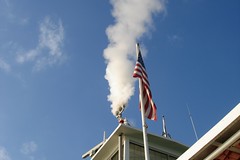 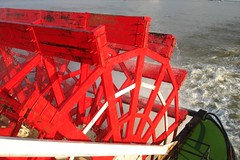 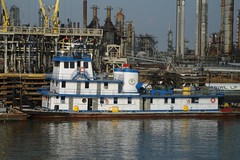 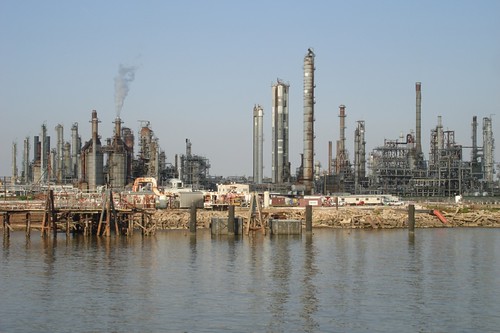 Next on the touristy agenda was a ride with a mule buggy. We were rather lucky with the driver – he was of Irish descent, but his accent was pure New Orleans – through and through. Dane claimed not to have understood one word he said. And he said a lot! And let Dane drive the mule. He (Dane, that is) was so proud and never realized that the mule knew it’s way through the French Quarter better than most. And also knew to stop at the lights! The driver told one dirty Irish joke after another – among lots of both interesting and juicy (but not necessarily true) anecdotes about New Orleans. 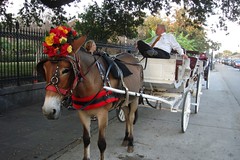 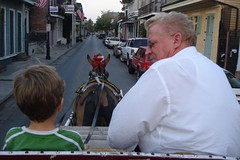 After that we were ready for some food and chose the much recommended Acme Oyster House. Even if it had a queue outside, we were inside in a few minutes. The food was very good – particularly the chargrilled oysters. Mmmmm. But the service. It was super quick – we’d hardly sat down before the waitress was all over us to make up our minds NOW. And the oysters were on the table in a couple of minutes. But – unfortunately – so were our main courses. Which of course meant that the main courses got cold before we could get around to them. And the noise level! Quite stressfull dining experience – in spite of the lovely food at very fair prices.

The black cab driver who took us home was a man who knew how to multi-task. He was on his cell having a very serious discussion with his wife about their finances. And he was discussing with the dispatch about his next ride. And explaining stuff to us. The radio was on too. All this besides driving… But he got us home safely and quickly.

The next day we decided to venture into town (campground is 6 miles west of downtown) by way of public transportation. That’s another first on this trip. So we went across the street to the bus stop. Very soon an elderly black man came, lugging a huge carry-all. He spoke in the dialect I’ve read that the slaves spoke. He said: “Y’all gotta ax the driver”. He was mighty friendly though. Well on board the bus we were approached by a number of more or less strange characters, both blacks and whites. But they were all extremely kind and helpful. We changed from the bus over to the newly reinstated St. Charles streetcar. That was a wonderful experience. The streetcar has only been back in action (after Katrina) for a few weeks. When we were in New Orleans last time, it wasn’t running. 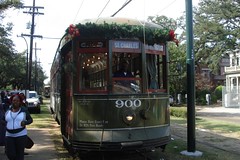 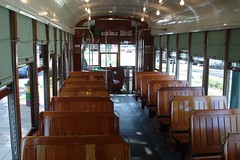 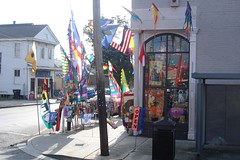 we were there. Last time Dane got a wind spinner depicting a helicopter, but unfortunately – and the cause of much crying – he forgot it hanging from a tree in Savannah. This time we got two… And a long chat with Brad & Dellwen, the two ageing chaps who run the shop together. They certainly were characters too. Dellwen showed me what Brad had brought back with him after having left him to hike in Alaska for several weeks: A big gold ring, studded with diamonds. So sweet!

We jumped back on the streetcar and continued to the French Quarter again. We’d decided to have a proper meal for once, so had checked out the Zagat guide to restaurants. We’d chosen one and also been in there earlier to book a table. When we came back to claim it, the snotty hostess told us we couldn’t get in, because David was wearing shorts. They could have told us that the first time round, we thought! We trodded on, wondering what to do, because Dane was getting tired. On the way David had the good fortune of being shat on by a pigeon. At the time he didn’t appreciate it at all and was swearing a good deal… But just around the corner was a restaurant with a beautiful courtyard where people were dining. That was exactly what David had been longing for. Sitting outside among palm trees and having a lovely meal. They didn’t mind the shorts or the six-year-old, so we got a table in a corner by a little fountain. In Zagat we read (under the table) that this was one of New Orleans’ top restaurants, Bayona. What amazing luck! David now blessed the pigeon rather than cursed it. We had lovely food and a really, really nice evening. It was expensive for New Orleans, but not at all compared to Copenhagen or London. Just this one example: I had a glass of a wonderful late harvest with my coffee, a wine I’ve tasted before. Reason I remember it, is that it shares it’s name with my brother. It cost 5$ for a glass.

Needless to say, we were approached by more very special characters while waiting for a taxi outside. One guy wanted to make the DJ across the street play Puff the Magic Dragon for Dane, but of course needed a few bucks first, another guy told us not to trust the first guy. And then a biiiig SUV drove up and six black youngsters, all in white, got out, the biggest one of them with a huge snake around his neck… and true to form, our Pakistani taxidriver believed in The Jewish Conspiracy and talked all the way about politics in Pakistan, Iraq and US. Only took a break to marvel over the fact that we actually knew who Benazir Bhutto is…

New Orleans, we will be back! 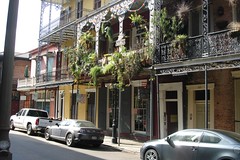 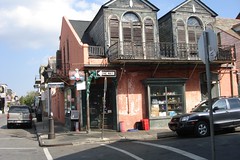 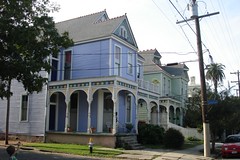 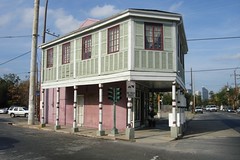 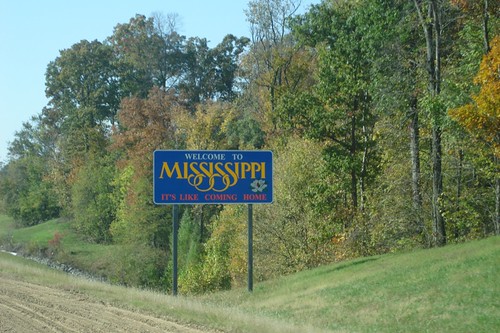 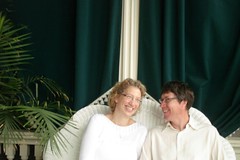 If, on our wedding day, anybody had suggested that we’d celebrate our 7th wedding anniversary in a provincial town in Mississippi, we’d probably have laughed at the thought. But here we are! We’d decided to splash out on some sleeping accomodation that wasn’t the RV instead of presents. And according to various guide books, Nathcez on the Mississippi river in the south-westerly part of Mississippi would be a good choice.

Natchez is a strange place – it survived the civil war without battle, because 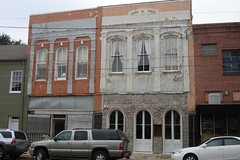 it’s commander thought it impossible to win anyway and so just flew the white flag. So the town is full of antebellum houses. It does it’s very best to attract tourists, but isn’t alltogether succesfull. Something that’s 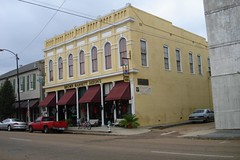 evident from the number of empty storefronts in downtown. At the same time some businesses seem to thrive – among these unfortunately the casinos. But also the guesthouses in antebellum plantation houses seem to do well for themselves. The one we chose was inside the town, because we wanted to be able to walk to the haunted King’s Tavern for dinner and on the whole not set eyes on the RV for a short while.

We had a lovely afternoon and evening and slept fitfully in big beds in a room 3 times the size of the RV. Next on the agenda is the “Full Southern Breakfast” which is something hotels and guesthouses take great pride in here – so we’re looking forward to it! I won’t be counting calories though – surely the breakfast will hold enough of them to keep me covered for a day or two… 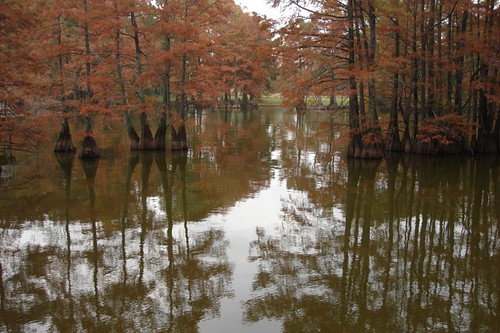 It’s great to be back in the south – there’s something about it which I can’t define, but really like. And I like the warm weather too! Today we’re headed for New Orleans for a repeat performance. We loved that city and want to spend another day there. After that we’re headed for Texas again to complete this part of our trip by celebrating Thanksgiving with the family. We’re very much looking forward to that. 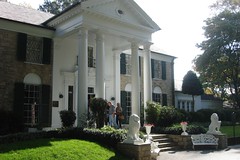 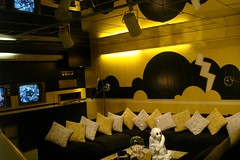 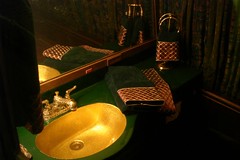 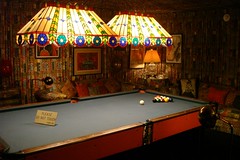 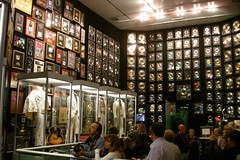 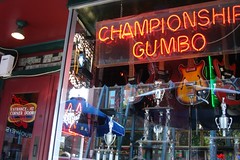 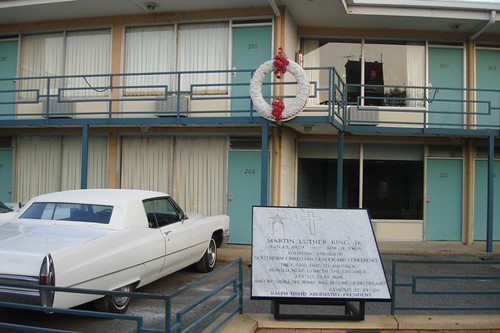