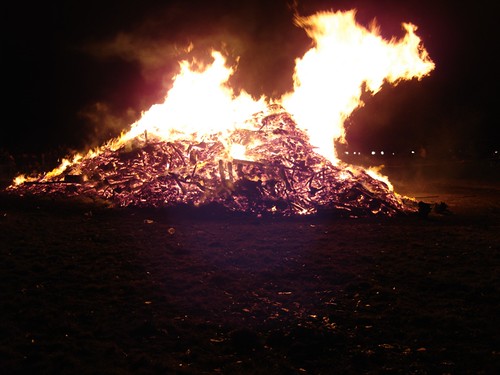 Yesterday was Ripley Bonfire Night – one of the year’s biggest events in our neighbouring village where Dane goes to school. The entertainment starts with a procession of floats through the town. It’s not a very big town, so this year’s five floats were a record, I heard. Dane’s class at school were in charge of the school float. The chosen theme this year was to celebrate that the school has become a Primary School, so it was something with launch and rockets… The parents – some more than others (find me in the latter category) – worked hard on creating a spectacular float. Unfortunately we didn’t win the float competition. The girl scouts (called Brownies in this country) won with a float on the theme of the Narnia Chronicles. 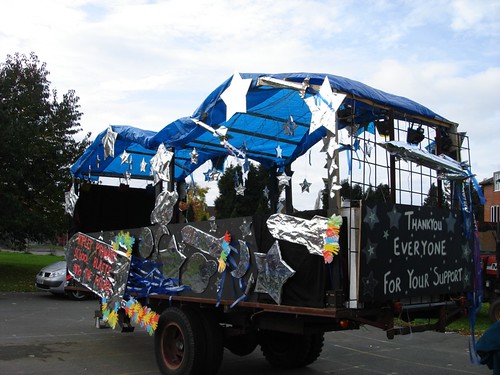 The float's just finished - five hours before the procession.

There were around 10.000 people in Ripley, so there were a lot of spectators along the way. After the procession the bonfire was lit and then there was an impressive fireworks display. After that we were tired and went home for some tea and cheese sandwiches – with sore feat after hours of standing. 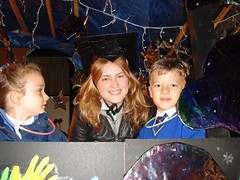 Today the weather has been really, really awful – although it’s cleared now and there’s the most spectacular sunset – so we’ve stayed in all day. First it was the usual – a couple of hours of Sunday Times. Dane has worked out the Catch up TV, so he spent the morning catching up on his favourite programmes on CBBC. Then we played Star Wars monopoly for I don’t know how many hours. Dane won – without cheating on anybody’s part. Now it’s time for me to get out of my chair and into my kitchen. The menu says Vietnamese prawn and cauliflower coconut curry. Hope it’ll turn out as nice as it sounds. Then it’ll be time for some serious TV watching – all the programmes we’ve recorded in the past week. First and foremost Merlin, a wonderful series for the whole family on BBC. We enjoy every minute of it! 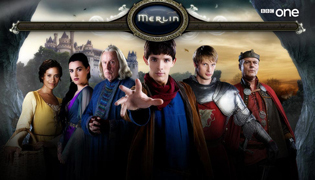 The central cast in the tv series Merlin

forrigeWordPress agony
næsteHere's another couple of reasons why you should vote for Mr. Obama if you're an American