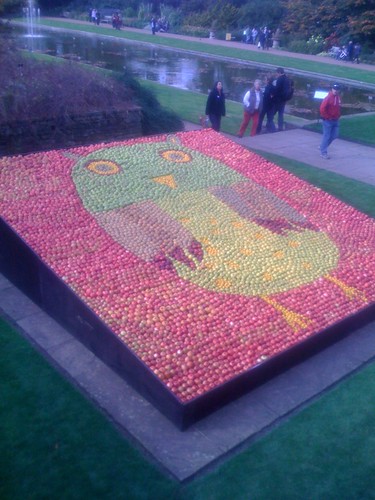 What do they have in common? On the surface of it, nothing. But I see two things. One – they’re both sign o’ the times. Two – they appear on my blog in the same post…

I found a link to this film on Boing Boing. It’s Girl Talk, Lawrence Lessig, Gilberto Gil and Cory Doctorow in a film about the end of (some) copyright. Good! This article, also from Boing Boing is also about copyright. Are we allowed to sell our old CDs?

It was also Boing Boing that pointed me to an Atlantic article that I hadn’t read yet, although I’ve just downloaded the most awesome application to my Iphone, which – among a zillion other things – allows me to read the Atlantic on my phone. Wow!!!! The article is written by a journalist who – at the risk of getting arrested and prosecuted – shows how airport security is much more show than it’s actual security. Really very scary! One of many holes he uncovers, so to speak, is this:

And now for something entirely different. On The Long Now Blog I found a link to something new. Crowd powered translation. Whenever you have five minutes, you can go there and help out. You can choose something to translate that’s important to you and then just do as much as you can that day. I just tried it and translated a bit of a discussion between Will Wright and Brian Eno into Danish. Click here and see my just translated text as subtitles to this video (only the first two minutes – must do more soon). It’s a cool tool. Imagine an organisation with an important video they want to get out to as many as possible, quickly. They send link – e.g. through Facebook – to the video’s transscript on this site and members from all over the globe can translate it quickly. You can then load the video onto Youtube and from there redirect people, who don’t understand the original language. Cool tool!

It was quite a nice day today and we took it veeery easy. Read the Sunday Times for a couple of hours and then went to Wisley, as we quite often do. It’s nearby and we’re members. They had a farmers’ market and pumpkin carving for children. So Dane carved a small pumpkin, which is now guarding our front door. And David bought dinner, a freshly made game pie. Uhm, it was nice. Dane found some bread in the restaurant and we went to feed the ducks. But it turned out to be more fun to feed the fish! The top picture is made entirely of Wisley’s own apples by Wisley employees. Apple Owl. Looks good, tastes good and even sounds good! 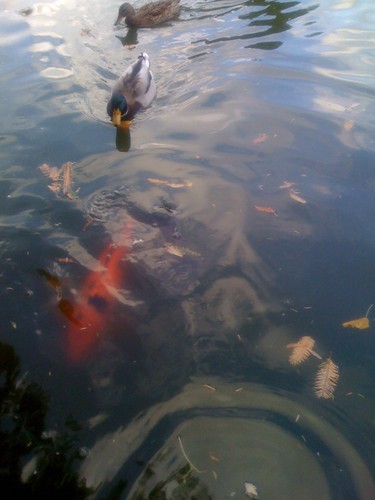