My oldest son Emil and his girlfriend Ida are spending some time with us this week. Where we’ve hardly been up to London since we got here, obviously the two youngsters didn’t want to miss out on the big city. And they wanted me and Dane to come along (David was away on business). So we all took the train from Woking to Waterloo. It only takes 20 minutes, so it’s really not such a big deal.

Also our friends Lotte and David were in town with their son, Dane’s best friend, Adam.

We trotted around a bit without any particular aim, but then Ida wanted SHOPPING and Dane wanted HAMLEY’S… So Emil let himself be dragged round crowded clothes shops (sale’s on!) and I let myself be dragged round Hamley’s – five floors of toys. Only the the girlie-floor can be avoided… Anyway, Dane was quite good about it and I got off lightly…

We met up with our friends and spent the afternoon together. We had dinner in an Iraqi restaurant on Edgware road. After dinner we tried to find a place to have a cup of coffee, that wasn’t completely crowded and also would accommodate our two little boys. All the Neros, the Starbucks and the Costas were either crowded or with only inside seating, so we just trotted on and on. In the end we were rewarded – we found a little French Café, the French Bakery, in James Street (off Oxford Street) where we had lovely coffee, good sweets and great service. From Waterloo we made it home in exactly 34 minutes (including taxi from Woking – Dane was too tired to walk – it was after all 11 pm).

We tried to make the most of Emil’s and Ida’s stay, so the next day we did a barbecue with David’s cousin Karen and her two boys Robert and Max. We sat out all evening and enjoyed the rare balmy night. 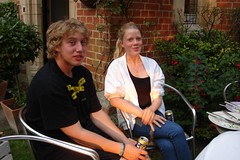 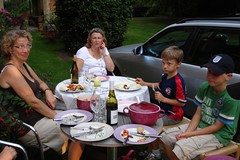 In the weekend we took a longer trip to the CLA Game Fair in Oxfordshire at Blenheim Palace. Emil just absolutely had to visit the app. 50 suppliers of fishing equipment all present in one spot. His hands were practically shaking… (maybe I haven’t told you, but he’s an avid fisherman and has recently started fly-fishing). David is also rather mad about fishing, so Ida and I just tagged along, knowing that there would be lots of other things to look at. Although an extremely hot day, it was still nice and even Dane had a good time. 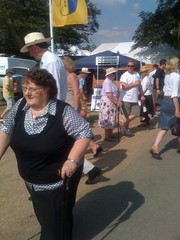 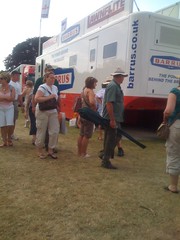 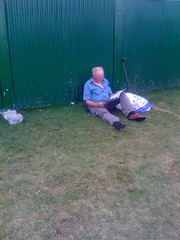 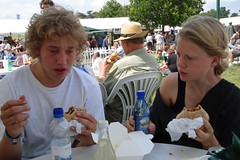 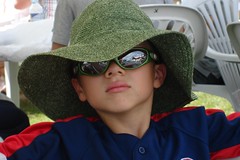 With two new fly-fishing rods aquired the obvious next step was of course going fishing. 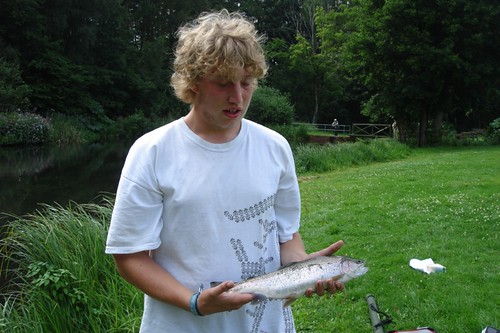 No way that Ida, Dane and I wanted to stare at those two throwing their lines all day, so we spent the hot, hot 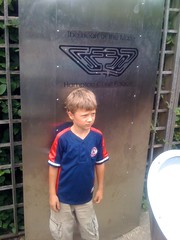 day at Hampton Court Palace. We enjoyed it very much – Ida is a real castle & museum kind of girl, bless her! And Dane was at his very best behaviour, curiously interested in furniture, four poster beds and tapestries. He’s rather fascinated with Henry VIII. But then, he is a most fascinating character, isn’t he?

Now we’ve sent Ida and Emil home and are by ourselves again. David has spent three days doing our tax returns for both Denmark and England. An absolutely horrifying enterprise! All three of us are very happy that it’s done now!

What’s left now is to plan our holiday. You may laugh at this – planning your holiday after August 1st, but it was only in March we came back from six months of fantastic holiday and we’ve decided to go very low key and local this summer. We’ll spend some time with David’s sister and her family at the summer house on the coast in Sussex and then we’ll go and visit David’s older brother in North Wales. Dane has another five weeks left of his summer holidays, so we’ll also make some day trips to get to know this bit of England better.