Will the sight of a boy in a tree become a rarity? 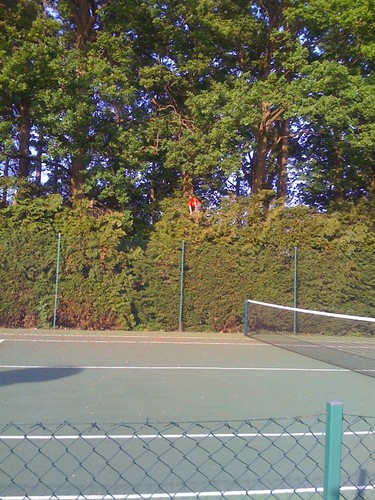 It’s Dane up there in the trees!

The Times and quite a few other media have the story today about a study made by GE Money Bank. The study shows how we spend much more money on boys than on girls. The boys’ sports gear and electronics cost a lot more than the odd bangle, pink mobile phone or black-black eye-liner. A reader comments quite sensibly that we’re still treating boys and girls differently in ways that we shouldn’t (will come back to the ways that we should): Namely for instance by choosing to call a girl’s tennis lessons or music lessons “luxury” while a boy’s football lessons are “necessary”.

The Times then links to an article that so much speaks my heart. How boys just can’t handle sitting down for hours on end and how we’ve become scared of our own shadows and won’t let children out to climb trees and play with the neighbours the way children used to. I agree, traffic is a lot worse than it used to be. But it seems to me that many parents fear the big media beast “the male abductor” even more. Although he’s less prevalent now than he ever was. Also, I so often hear how just about everything is dangerous, the children could fall and hurt themselves. Yes, that’s true. But if we overprotect them throughout their childhoods and never let them experience the consequences of  this and that in relatively safe surroundings, then how will they get along when they grow older and have to?

When I was a little girl – and my parents were very protective of me – I was still allowed to take the bus on my own to school every day. Jaws would have dropped if any of the children had been driven by their daddies to school. Today I think the jaw dropping has reversed. If you don’t drive your child to school in your big gas-guzzling “safe” 4WD, you’re just not doing right by him or her. I walked on my own to violin lessons once a week, right through the neighbourhood where another little girl had just been gruesomely killed. But my mother reasoned that as long as I didn’t stray and didn’t go with strangers – and I had to solemnly promise this many, many times – I would be fine! And I was.

In my child’s preschool (in Denmark) we several times experienced what I found to be weird and very irrational uproars from parents. Once was when a boy fell off the climbing structure and broke his leg. A cry for the instant demolition of the climbing structure. Luckily the school didn’t fall for it. Picture a playground without a climbing structure! YAWN!!! Another time was when my son fell and hit his head on the edge of one of the milk crates they played with endlessly. He had TWO stitches and was perfectly OK the next day. But instantly a cry from some parent to have the milk crates removed. Playground with no climbing structure and no stacking of milk crates. Double YAWN!!! And in a fluke accident with another preschool, a little boy was killed when a tourbus he was a passenger on collided with a tractor. A terrible accident. My heart goes out to everyone involved. But it was the type of accident you can only avoid if you stay in bed for the rest of your life. But some parents instantly said that they would never let their child be transported by bus ever again. Despite the fact that all statistics show that the most dangerous means of transportation on the Globe is daddy’s car…

Oh well, those articles really got me going. Time to cook some supper!