We had a culture shock the other day (December 1st). We had spent a nice afternoon in the cowboy village at Enchanted Springs. It was fun, we’d learned a lot about cowboys and indians, fed vicious looking catfish and petted several longhorns. 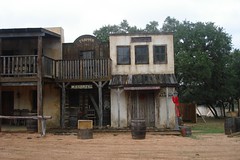 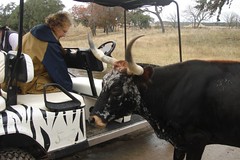 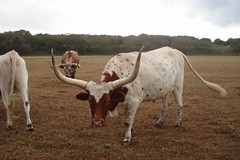 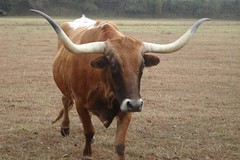 After that we had a most satisfactory meal at Chili’s and we were on our way home, when we came into Boerne (Bur-nee) and found the traffic being diverted. Everybody seemed to be parking their car and heading in the same direction, all towing kids. Ah ha, the intelligent tourists exclaimed: It must be something to do with Christmas!

And it was. A Christmas Parade. We used to think that Christmas in Denmark and the UK is over commercialized and utilized for a number of purposes that probably weren’t on Jesus’ list. But – lo and behold – we had not been to Boerne! The Danish and English cristmas is pristine in comparison. 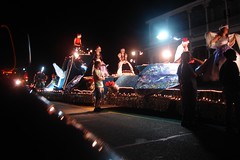 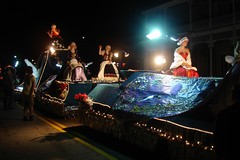 In a brain-numbing mixture of love of uniforms, dress-up, marching, beauty pageants, pets, football and numerous other things, the parade made it’s way down Main Street. We were dumbfounded!

But you know what? It was also quite lovely… With all the bright lights, all the townspeople out and about, chatting and visiting and the antipicitation of the holidays, it had it’s own charm.

Generally, that is what we’ve found here in the US. The same people who are unbelievably kind, friendly and so helpful it’s embarrassing also harbour views of the world that we find appalling! The country is so beautiful and so charming and at the same time so incredibly ugly and scary. I guess that’s what makes it so attractive, compelling and fascinating!

This morning I checked the news on Danish national tv’s website. I found a disturbing news story about a Guantanamo prisoner, who’d cut his throat with his fingernails. Unfortunately for him, I guess, he survived. The official explanation from Guantanamo and Washington was that he did it to cast a bad light on the US. Yeah, that’s what it said.

We’ve had several discussions about the US media with the family and with other people we’ve met here. I’m sure it’s difficult to judge the quality of your own country’s media if you don’t have anything to compare it with. But I also think that most people (not only Americans) can’t be bothered to make that comparison. Well, I can. And I searched for this news story on a number of major American news sites. I found the story on CBS, but not on CNN, Fox or ABC.  The fact that I found it on most of the major newspaper sites is good. But it’s also a fact that most Americans don’t read a newspaper (or it’s website) and therefore rely solely on the TV networks to provide them with the necessary knowledge to form an opinion.

OK. Got that off my chest…

And, by the way, tomorrow morning we fly west. To San Francisco, California. See you there!