In Denmark and in the UK, we call it a supermarket. But here, where SUPER really is a matching term, they humbly call it a grocery store. Even if it’s 10 times the size of a large Danish supermarket. 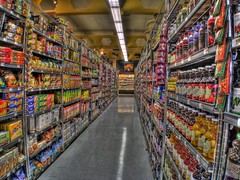 We have actually been in the States for close to three months now, but we still get lost in the grocery stores. I guess if we’d stayed in one place and only went shopping in one or two different grocery stores, we’d have learnt to find our way round by now, but we’ve been to so many different ones… And even if I am beginning to see a pattern in the way they have them laid out, there are still items that I just cannot find. So everytime we go shopping, even if it’s only for dinner for one evening, it still takes an hour…

Readers of my blog(s) are familiar with my inclination towards organic food stuffs. They are not easy to come by here, but in most bigger grocery stores, you can get organic milk, butter, yoghurt, cream etc., mostly from Horizon. I haven’t seen organic meat outside Whole Foods, which I’ve written about previously. But some stores sell meat without hormones. I’ve also seen some organic fruit and veg and spices at Shaw’s (which we really liked), Kroger, HEB and Publix.

Generally though, I find that most of the choices they offer you in these huge temples of consumption are false.  For instance, I went looking for detergent. In the average grocery store I guess there are at least 30 different brands. And they all promise the same results (guess what), cost more or less the same and sport glaring, ugly packaging. I was – evidently – looking for a detergent which would promise me the least damage to the environment while getting the job done. I looked and looked, but none of them seemed to promise me anything of the sort. In the end I chose Purex – I guess deluded by the name and the relative simplicity of the packaging. However, I don’t really think it’s any better than all the other stuff…

In Whole Foods (the nearest one 25 miles away from here) you can get the whole range of Ecover, so clearly it can be had in this country, but isn’t in demand :-(

When you shop without a shopping list prepared in advance, you’re easily deluded by the choice. Like, look, you can choose between 50 different types of beverages! Ain’t that great? But when you look closer, the choice is very limited. There are the ones with sugar and the ones with sweeteners. And that’s it! At home I usually offer Dane some sort of cordial when I think he deserves something sweet. But here the only cordial-type beverages you can buy are either made from grapes, which Dane unfortunately dislikes or not from fruit at all… The type of cordial made from raspberries, strawberries or redcurrant,  that you dilute with water, which we always had at home and sometimes even made ourselves, just can’t be had here. So it’s water, milk, beverages with artificial sweeteners (which I try to avoid), chocolate milk or soda. Dane drinks a good deal of water, but isn’t too keen on milk. That leaves me with very little to choose from! In this, the land of choice!!!!

However, if you try shopping with a shopping list, for instance because you want to prepare a real meal with several courses, you find that there’s lots of stuff you just can’t get or where the choice is more than limited, even in a fairly well stocked grocery store. I wanted cardamom pods to ground myself. But they didn’t have that. And only one (non-organic) brand of ground cardamom. And vanilla: They had at least 10 different kinds of vanilla extracts and a veritable abundance of vanilla sugar. But only one kind of whole vanilla bean, which I had to have a store clerk to help me find. I don’t think she’d ever seen or smelled one. And it wasn’t a very good one either. I needed rapeseed oil. Couldn’t find that. And then there’s the weird thing about lamb. Americans don’t eat lamb. As David puts it, the founding fathers probably didn’t approve of lamb, so… The general explanation we get is that people had mutton as children and hated it. And so they are not trying lamb as grown-ups. What’s even more strange is that veal is so hard to come by. I mean, in a steak-loving country like this? All that said; some

choices are real and abundant – in the good grocery stores they offer a marvellous selection of seafood. And it’s cheap too!

Don’t get me wrong, though. I love shopping here and I love walking up and down the aisles looking at all the strange products and sneaking looks into other people’s shopping carts. And if I were to live here in the US, I’d just have to settle down close to a Whole Foods store. I’d be happy then – foodwise!