At 9 o’clock this morning the power went. Not just in our flat, but in the entire neighbourhood. And it stayed off long enough (around 2 1/2 hours) to make itself felt. What was there left to do? Mobile phone still worked, so could talk, text and also browse web, post on Facebook and Twitter. But that’s not really what I want to do between 9-11, which is normally my most productive time of the day. So I went to the gym, which is far enough away so it wasn’t hit by the outage. On coming home, the power was back on – and so was the heating, brrr it got cold very, very quickly! We have central heating, but that too needs electricity! 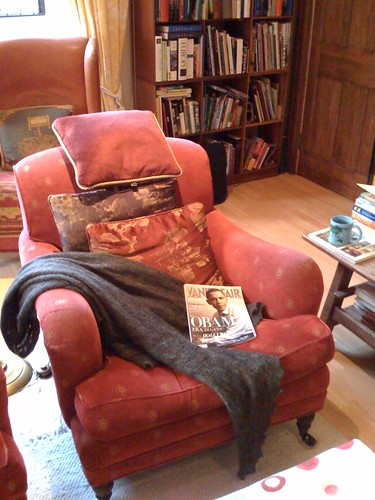 A good chair, a warm shawl, something worthwhile to read and a nice cup of tea...

Husband and I talked about what we REALLY need, how we would enjoy – or not – living in a more frugal society, if that indeed becomes the reality as predicted by James Lovelock.

In such a life we wouldn’t be entirely without electricity but would have to prioritise what we want to use the limited amount on. Main priorities:

Although it would be quite a change, we believe we could live happily with a gas fired AGA, which would produce heat in addition to food (besides taking up half the space in the kitchen…). I already bake all bread myself, so would just have to get friendly with the AGA. Electric kettle, toaster, Kitchen Aid & hand mixer, microwave, clothes dryer, dishwasher, hair dryer, electric razor, TV, DVD-player, game consoles, stereo etc. we decided that we could live without. Some with more regret than others. The computers, the mobile phones and the digital cameras could all be charged via some of the better solar chargers out there.

If we had our own house and garden, we could have solar panels on the roof and probably generate enough power to heat the water we needed. Also, we could grow our own vegetables, we did that in our house in Denmark. Besides being enjoyable, the veg tastes better and it’s healthier. If we also had a greenhouse, we’d be able to prolong the season a lot.

Most houses and flats today come without a larder. For the younger readers I’ll explain that a larder is a smallish (or big, in a big house) cool and dry place where you store foodstuffs. If you had a larder, you’d only need a fridge half the size of the ones we have today, because lots of the things we put in the fridge, don’t need temperatures that low. It’s only really milk products, fish and meat that need such low temperatures.

Could go on like this, I guess, but what’s my point? My main point is probably that we’re so d… lucky to live in such affluence where everything we need comes out of sockets, taps, shops etc. All we need to do is pay… And as long as we have the money, we pay, but maybe we don’t think enough about the other kinds of currency we’re using when we gluttonously devour all the things on offer?