So so sad and so so frightening 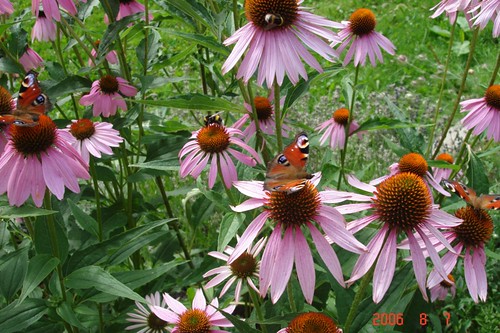 I used to grow these in my garden (echinacea) and they attracted scores of bees and butterflies.

Just read in yesterday’s Times about the plight of the (bumble)bee. I’ve read about the trouble of the bee population diminishing rapidly before, but this article, in such a conservative paper, really spells it out so there’s no misunderstanding it: If nothing is done – and maybe even if something IS done – the bee and the bumble bee will be extinct in Britain 8 years from now. Eight years! In evolutionary terms that in the blink of an eye!

If there was ever a really good and totally tangible reason to buy organic products, this is one. For more reasons than one: To reduce pollution with fertilizers etc. To encourage the exchange of crops from one year to the next. To encourage the re-entry of clover, which is apparently the most important crop to attract honey bees.

So come on now, all you out there. Buy organic! Not just baby food, but everything you can lay your hands on.  It’s not always easy and I myself could do much better. I also realise that for some people it’s not an option for economic reasons. But I know that a lot of my readers could easily afford it if they so chose! Quite a lot of the foodstuffs that we can’t get in the organic versions in the supermarkets, we could buy online if we could be bothered. And here in England we can buy lots of lovely organic stuff at the farmers’ markets. But if we at least start by buying the food basics organically, it’s a start. So organic fruit, veg, bread and flour. And organic chickens, veal, beef and lamb.

And you garden lovers out there! You’ll be first to suffer, because a certain species of bees, specialising in fertilization of so-called deep-throated flowers like foxgloves, irises, red clover etc. are almost already extinct and their southern European brothers, which are being imported to take their place, don’t have long tongues and thus can’t fertilize the above mentioned flowers. So throw your fertilizers in the bin and get out there and do your bit for the bee!

Take out the time and read the article if you think I’m exaggerating!