Dane’s school has got permission to become a through school from this September. We’re SO happy. If you’re an outsider (or just Danish, tihi), here’s an explanation:

Dane’s school, Ripley Church of England Infant School, has till now been an, yes, you guessed it, infant school. That means a school for children of 4 – 7 years of age, sending the children off after Year 2. That was also why we, when we were first looking at schools, did not look closer at Ripley. But upon finding out that we wouldn’t get into any of the better primary schools in the area, we took another  look at Ripley. And found out that they were working hard on becoming a through school or a primary school. A primary school takes the children till they are 11. Then it’s off to secondary school.

So here’s a state school in a village in Surrey. Definitely, a lot of the parents are very resourceful, but so, we’re told, are the parents in other schools in the area. The driving force however, seems to have been the head teacher, Mrs. Walker. She is such a dedicated school person, you just can’t believe it. And she has clearly inspired her staff, the school’s governors, the PSA-active and the parents in general.

It was a great wish in the local community to have a primary school in Ripley, and so they set about getting themselves one. And how did they do it? They raised money so they could be the first self financed primary school in Surrey. And so far they’ve raised more than £ 60.000 and the building of three new classroom is in full swing. And today Ripley got the final go-ahead from the local council, who’d been under some pressure from a primary school in the area to not let it go through.

The money has been raised in all sorts of ways. For instance the selling of homebaked cakes at the Farmer’s Market, the possibility for parents and others to shop via the school’s website, thus generating money for the school and events at the school where the parents pay to get in, pay a small surcharge for a drink or a cake etc. etc. They have been incredibly inventive! 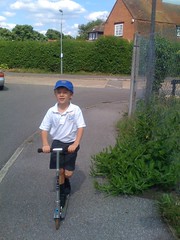 For us – or Dane that is – it means that he can stay on at Ripley, even if he is now of the age, where he should have gone on to a through school. He’s at the moment in a class with children one year younger than him, because he comes from Denmark which has a different school system and because we traveled for six months. Now he can move one class up when he’s ready for it or even do it gradually.

A warm congratulations and thank you to our headmistress, the governors and the PSA.