Our camp offered a free shuttle bus to downtown New Orleans at 9 o’clock. The driver also took it upon himself to tell us more or less everything about every little house or ditch we passed on the half hour drive. You get the impression that these guys are paid on a words-pr-minute basis. Were they paid on basis on how much their audiences in fact understood of their ramblings, I think they might consider slowing down. Our neighbours in the bus, an elderly American couple, gave up very quickly!

It was quite glorious weather, sunny and hot, but also a little bit windy. Cool, the natives called it. I’d say that’s because they’ve never been to Denmark… The minute you set foot in New Orleans, you realize that everything you’ve heard about how different it is from anywhere else, is quite true. Every phrase I can think of to describe it has been heard a million times before, but still, how about melting pot… 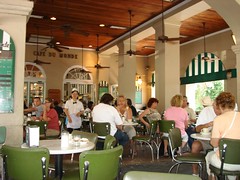 We started, as we’ve been told one should, with café au lait and Beignets at Café du Monde. For a food item that is clearly mass produced in that kitchen (they serve nothing else), they tasted surprisingly good. But they are not good for you!!!

Then we spent the next many hours trawling up and down the French Quarter, mainly Royal Street. David had a haircut at a chic little hairdresser, while Dane and I had a drink at a little café, where the waitress had a little bone through her nose. And no, she didn’t look anything like a maneating pygmy. More like a punk from London. The French Quarter is very pittoresque, but doesn’t look anything like the France I know. See here for yourselves: 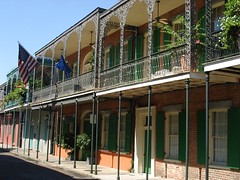 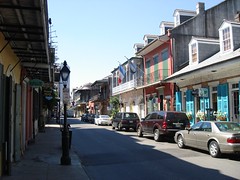 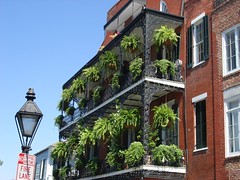 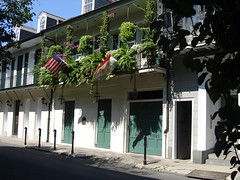 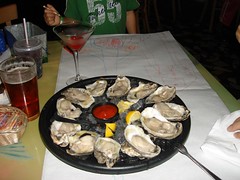 After having eaten a dozen very good oysters (8$!!!) and Jambalaya, we headed to another part of town, Magazine Street. Nobody apparently ever bothers with the Street or Avenue part of the street names. It’s something like if we said H.C. Ørsted, everytime we mean H.C. Ørstedsvej. Or Oxford, when we mean Oxford Street. It’s that abb(reviation) thing again.

Magazine is very, very long, like so many streets in this country. I don’t think I’ll ever get used to 5-digit house numbers! Almost all the way it is lined with detached or semi-detached houses in colonial style. Some of them so small that they look like doll houses. Either the new houses are built to look as replicas of the houses before them, or they just don’t build new houses. This house here is the only example of modern architecture we saw except for the highrises. 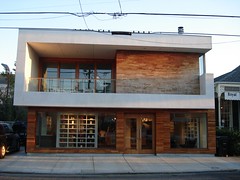 Every other house was in the style of these: 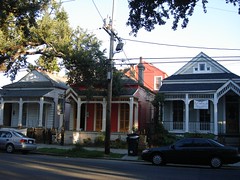 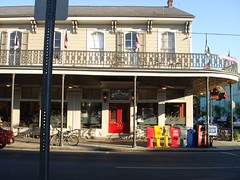 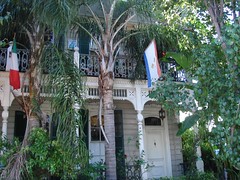 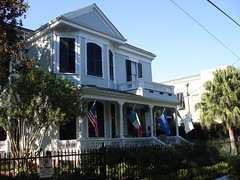 At one point we came to the fire station. A couple of firemen were sitting about in front of the impressive truck. Dane and I went over to ask politely if we could take a picture of them. And being New Orleanians, they instantly invited Dane to sit there with them. And inside the truck to see everything. And even to sound the horn once! It’s my fault the picture isn’t better – I must have been almost as awe-struck as Dane was! 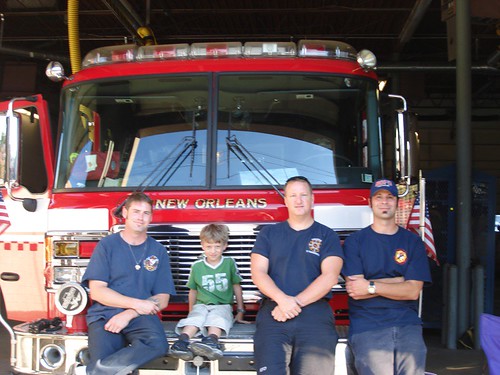 There were several remarkable shops on the part of the street that we negotiated before nightfall. A lingerie shop with such a special atmosphere and a comfy sofa for the accompanying spouse with glossy magazines for men… And a combined barbershop, hairdresser, haberdashery and bar for men. Unfortunately David had just had a haircut a few hours earlier and he didn’t really need a shave… And there was the wonderful and mysterious shop that sold only flags and wind mobiles. The ancient owner told us that before Katrina, he’d hardly been able to make a living, and nobody really knew what the New Orleans flag looked like – or cared.

But after – everybody wanted the flags for their balconies. And they wanted wind mobiles for joy – something it must have been very hard for a lot of people to find in the months after the storm. It’s been two years since Katrina – and she’s visible everywhere. Some places in the form of posters about rebuilding the city and being proud of her, other places you can just see the waterline. And to the east – mile after mile of devastation. And everywhere people are still talking about it. I would, too.

While the last light faded, we watched some youngsters play basketball and football and then went to have a nice dinner. The taxidriver who was supposed to take us home, knew less about the city than we did. And his English was, eh, rudimentary. But with the help of a GPS and David’s pointing and directing we made it home to camp.