What a wonderful place!

After having done our washing in a laundromat (yet another first), we drove to a new campsite in Baton Rouge where I have more family! They had long known to expect the crazy Europeans and when we announced our arrival, they were quick to invite us to dinner. And not only dinner, no, homemade Gumbo! Mmmm, that was good! And I must say – what nice family I have over here! Keep’m comin’! 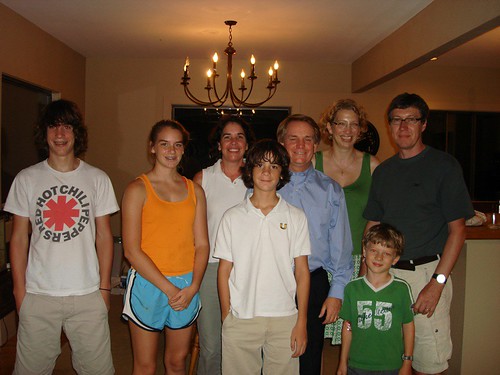 The sweet and hospitable Bryan family (and us) in Baton Rouge, Louisiana

The next morning we got up and away early for our much anticipated tour of the swamp. We decided to splash out here and charter a boat rather than sharing a ride with other tourists. That turned out to be a very good idea. Searched around on the web for a while and fell completely for this guy here, who’s love for the Atchafalaya basin is unrivaled. On the way there, we didn’t get lost once and made it on schedule (more on getting lost later…). We let our RV stand on a deserted parking lot and took off in Dean’s little boat. Wauw, it was fast! 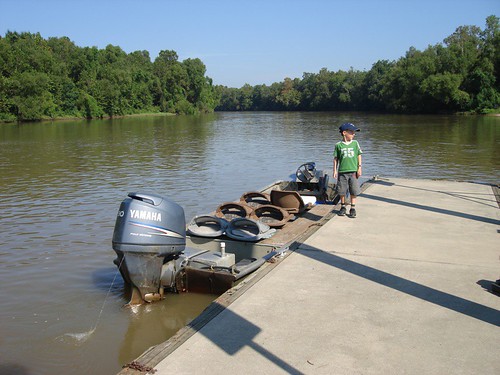 The swamp, the atmosphere, the sounds defy description. But it was breathtakingly beautiful and magic. Dean was a great guide – telling us about the history of the basin, the terribly many environmental issues that are facing the basin and wetlands generally and about the plants and animals that are invading the swamp and the ones who are extinct or threathened to be extinct. He knew the name of every bird, fish and insect we saw on the way. And – contrary to popular belief – there were no mosquitoes or horse flies or other despicable creatures – only insects we saw in the 2 1/2 hours we were on the water were – dragonflies. In all shapes and forms. We didn’t see any alligators – Dean was sure he saw one at one point, but it went under when we came near it in the boat. He did show us the tracks on the river bank, though! However, I found the ancient cypresses much more fascinating than any alligator could ever be! 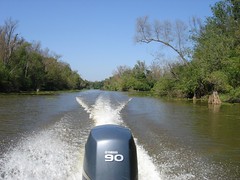 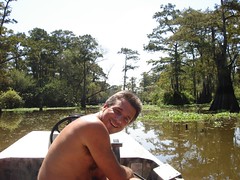 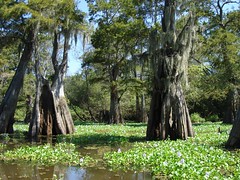 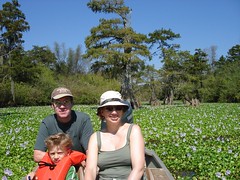 After this fantastic experience, we drove on down towards New Orleans. Pronounced New ‘Orleans much to David’s dismay. And we got so, SO lost. The GPS wouldn’t accept the address given by the campsite, but we figured we could just follow their directions which seemed pretty straightforward. Well, guess what, they were’nt, or else (which is not totally unlikely…) we just got them all wrong. Downside was that we drove around New Orleans for hours. Upside was that we got to see with our own eyes, exactly what havoc Hurricane Kathrina really caused down here. In some of the poorer neighbourhoods we drove through, more than half the houses were left, empty. We probably wouldn’t have seen any of that, if we hadn’t got lost. Besides, we made people laugh. The people sitting in front of their little rickety houses knew that we were lost and grinned at us – but in a real friendly way!

Tomorrow we’ll spend the entire day in The Big Easy.

1 tanke om “What a wonderful place!”