Here’s the latest news on the development from Forbes. Both congress and senate seem to be dragging their feet.

And I think that’s a good thing. I’ve decided that there is probably more of a libertarian in me than I’d thought. I read through Paulson’s plan when it was first launched, long and dead-boring as it was. And I just couldn’t agree with the man. I haven’t read Dodd‘s counter plan, but had it explained here.

Here’s a couple of good quotes that pretty much sum up my feelings on the matter:

Tyler Cowen, professor of economics and prominent writer, explains the difference between the two plans:

He points to this letter signed by a host of economists:

As economists, we want to express to Congress our great concern for the plan proposed by Treasury Secretary Paulson to deal with the financial crisis. We are well aware of the difficulty of the current financial situation and we agree with the need for bold action to ensure that the financial system continues to function. We see three fatal pitfalls in the currently proposed plan:

1) Its fairness. The plan is a subsidy to investors at taxpayers’ expense. Investors who took risks to earn profits must also bear the losses.  Not every business failure carries systemic risk. The government can ensure a well-functioning financial industry, able to make new loans to creditworthy borrowers, without bailing out particular investors and institutions whose choices proved unwise.

2) Its ambiguity. Neither the mission of the new agency nor its oversight are clear. If  taxpayers are to buy illiquid and opaque assets from troubled sellers, the terms, occasions, and methods of such purchases must be crystal clear ahead of time and carefully monitored afterwards.

3) Its long-term effects.  If the plan is enacted, its effects will be with us for a generation. For all their recent troubles, America’s dynamic and innovative private capital markets have brought the nation unparalleled prosperity.  Fundamentally weakening those markets in order to calm short-run disruptions is desperately short-sighted.

For these reasons we ask Congress not to rush, to hold appropriate hearings, and to carefully consider the right course of action, and to wisely determine the future of the financial industry and the U.S. economy for years to come.

And there’s another thing that I can’t help thinking about. What about the US’ economy in general? If this bail-out goes through, half the American economy will be based on loans in foreign currency. Most of it in yuan (Chinese money). Is that better than having some banks and some mortgage brokers go under?

Here’s a quote from BBC:

Ballooning state debt: The plan would swell the budget deficit, which could fuel inflation, economists warn (Mr Paulson has asked to raise state borrowing to $11.3 trillion, from $10.6 trillion).

A picture of Meg Ryan from The Women? Oh no! No pictures of face-lifted women on my blog. So here’s cute George. Picture borrowed from Styletraxx.

OK, some of you would probably much rather know what I thought of the film The Women, which I saw yesterday. Well, it stinks! I remember being pleasantly surprised by The Devil Wears Prada, which I watched on one of the long-hauls on our trip. Entertaining, funny and with a bit of bite. This one was/had neither. And tooooo looooong! My fingers were literally cutting through the air in some scenes… So, don’t go there. But I saw trailers for two films that I’m longing to see: Brideshead Revisited (oh, how we swooned in front of the TV, when the series was shown in the 80’s!). And the new Coen Brothers film. I’ve seen all their films and I just looove them… and George Clooney ;-)

PS: You’ll want to be wary of the above Wikipedia links (economy). All the articles are highly controversial. So – if you want to go in-depth with any of this, seek other sources as well.

(not ONE word about the presidential election over there in America)

I knew that people bet on practically everything, but a bet on whether the Large Hadron Collider at CERN will destroy the Earth was new to me. But, here it is. And check the prizes for winner and loser. Very subtle, very funny. There’s even a video showing what it’s going to look like for the lucky few who might be out in space that day.

On Slate there’s a really good and informative review of Chrome. The bit about every single operation being independent of each other sounds wonderful – oh how I hate that I can’t do something in one tab (or only at crawling pace) while I’m loading a film or downloading an application in another tab. And how I hate that Firefox slows my computer down. So when Chrome is ready for Mac, I will surely try it, in spite of the quirks it quite obviously also has. Or maybe, as the Slate writer suggests, Mozilla will hurry and correct these obvious flaws in an otherwise great browser. 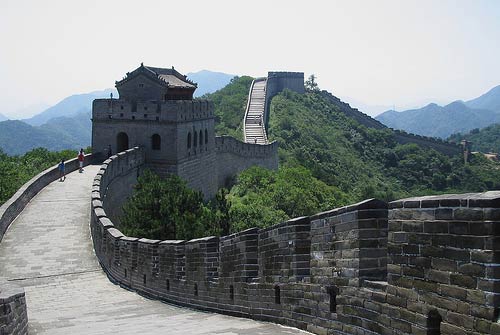 Today’s final post is unusual. It’s called the Walls of China. Notice the plural. It’s very short, but has a poignant point…