Slate, New York Times, The American Prospect, Megan McArdle and a lot of sites that they’re linking to discuss the Obama speech. They seem to agree that it was a good speech, but not fantastic. He is an oratory master and has made so many good speeches during his brief career, that he’s made it difficult for himself. But see for yourself! While looking around all the politics sites, interesting news popped up – John McCain’s most unusual choice of veep candidate – the completely inexperienced, but young and female Sarah Palin. Check Wikipedia as the article is probably developing as we speak (or whatever it is we’re doing). Oh, how I love Wikipedia!

After one of my neighbours told me that I was not alone in experiencing faulty Internet here in our convent (thick, thick walls) and also was kind enough to tell me what he’d done to remedy it, I’ve become the very happy owner of three HomePlugs. OK, not exactly another step towards the wireless home – but oh, my Internet just works wonderfully – at full speed now. It’s like a big plug –  into the mains, one connects to the router with an ethernet cable and the others connect from the mains to my computer wherever I want to work. No installation whatsoever, just plug’n’play! Lovely, lovely, lovely!

So naturally I’ve been surfing around all day long and found lots of lovely stuff out there:

On happiness I’ve found a couple of good posts. They are both lists of things to do to be happier and not exactly groundbreaking science. But I still think they’re good and absolutely worth reading and maybe even memorizing. It’s Gretchen from The Happiness Project, but writing on another blog. And it’s from Pick the Brain about happy people’s habits. Btw Gretchen has a post on how to spot when you’re boring people…

these incredible people tell about their dreams and achievements. So this Indian guy with his hole-in-the-wall project took pride of place – he has put computers (with Internet) in holes-in-walls in remote places in India and discovered that any child between 5 – 14 can teach him- or herself and loads of other kids to use a computer in a few months. They even teach themselves basic English to do so. He quotes someone for saying “if a teacher can be replaced by a computer – replace him”. True! If the teacher can’t be better and more emphatic and inspiring than a computer, why have one?

When I started my origami craze I had no idea that it had somehow become “modern“. But clearly it has and I find that quite funny. Here’s a math professor who’s taken origami to a whole new sphere – using his math skills to do so. It’s downright incredible!

On the Long Now blog there’s a post by Brian Eno, who’s new album with David Byrne is on my to-buy list. It’s got absolutely raving reviews in the papers here and I am looking forward to hearing it. The post is about what happens to a society when it’s united in and committed to a very long-term project.

Jeff Jarvis writes about Paulo Coelho’s online presence. I must admit, I didn’t know about it and I’ve never read a book of his, although it’s probably about time that I read The Alchemist, which has apparently inspired many people. I’ve certainly noticed his books in prominent places in the bookshops. His website is very professional and informative and – where he differs from most other authors – there’s lots to read and download for free. 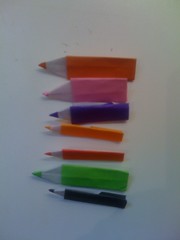 Dane and I have developed a taste for Origami. The pencils to the left are folded by Dane. Soon I’ll make a brag-post with pictures of our best creations. My most refined to date was a Triceratops (that’s a dinosaur) which I made earlier this evening. Dane’s comment: “Oh Mummy, that’s SO COOL!” A reward in it’s own… Inspiration and instruction courtesy of The Natural History Museum where we spent most of the day with good friends visiting from Denmark.

On Slate there’s a quick’n’dirty guide to testing various search engines, obviously prompted by the emergence of the self-proclaimed Google-competitor Cuil (pronounced COOL). It’s quite good and it’s more quick than it’s dirty, if you get my drift. Still, it’s good to bear in mind that if you often search within a specialty realm, it’s a good idea to make your trial searches with well known items within that realm.

Another way to waste some time online is to check if your use of the Internet is gender specific or not. Take the test here, it takes only a few seconds. Apparently I’m 64% male… and that’s without ever having visited a sports page in my online existence. The pointer came from Marginal Revolution – as usual.

Here’s an interesting article about US presidential candidate John McCain. I’m not a taker, so I needn’t be convinced. But reading an article like this, where the author clearly likes McCain and takes him serious as a candidate, is much more interesting than reading hundreds of articles that just make fun of McCain. He’s not to be made fun of, really. He’s one of two contestants for the world’s most influential job – and almost half of all American voters are looking his way at the moment. The article focuses on McCain’s Internet illiteracy. Apparently, he needs an aid to log on to a news site or a blog for him and the man has never sent an e-mail. I don’t believe that has anything – or much at least – to do with age. I know quite a few people of his age or near it who are very proficient on the web. It has to do with a kind of arrogance and stubborn defiance that is far more troubling than age! But read the article for yourself, it appears in the Washingtonian, the local website for all things Washington D.C. Pointer from Ezra Klein.

Tomorrow we head south for the first part of our holiday here in Great Britain.