Many months ago I got newsletter from RHS Wisley, which is right around the corner from where we live, so we go there all the time – sometimes just for coffee & cake. This newsletter announced the yearly music festival. My inclination was to go for Katherine Jenkins (despite fear of repertoire of musical hits), but I knew Dane would find that utterly boring, so suggested to husband that we indulge the little one (a huge Abba fan) and buy tickets for Abba/Queen tribute night. He agreed and I bought the tickets. The concert was sold out a few days later.

So, Saturday night was the night. Luckily the weather was quite warm, if not dry. We packed a basket full of munchies, wine and coffee and set off. Lots of people of all ages and really lovely ambience. Every police officer I saw had a huge smile on his/her face! 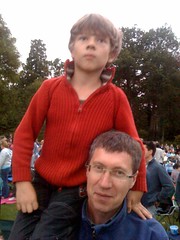 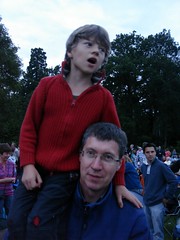 Having spent a considerable part of my adult life in the more forward part of the (Danish) music business, I’m not a huge fan of copy bands and never was much of a Queen fan. It’s different with Abba – as a Scandinavian they were just THERE – all the time. You could not NOT know their songs, unless you lived as a hermit. I’ve disliked most music festivals I’ve been to except the Roskilde Festival, which I think I visited 17 years in a stretch. Because of being in the biz, I always had privileges, so didn’t have to queue for hours to visit yucky toilets. At Wisley nobody had to queue for toilets and they were ever so neat! And nobody stumbled around half unconscious with drink and drugs and the music was not loud at all. Actually, it was so muted that I wondered whether I’m just simply going deaf! 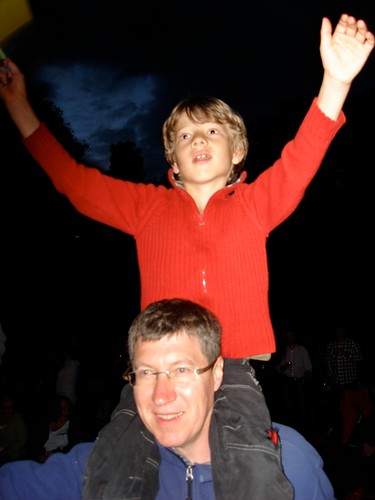 ‘Abba’ wasn’t that good, although not bad either. Worst bit was ‘Björn’ trying to be funny with applied Swedish accent. Arrgghhh. ‘Queen’ really was rather good – so much like the real thing. Very entertaining.

Also entertaining was of course people watching. He. I can’t decide whether I find it hilarious or exhilarating to see middle aged chunky women (like yours truly) going crazy to Abba? I would possibly go crazy to a different kind of concert – who knows (Erasure – wouldn’t that be fun?). But this left me more amused than anything else and I rarely got out of my comfy chair… Next to us was the funniest family. 50ty-something parents, gaunt dad with long curly (uni-professor style) hair and steel-rimmed glasses, mum very overweight and eh, motherly, two pre-teens, a girl who looked like a boy and a boy who looked like he’d much rather be doing math course work. Both kids sat slumped in their chairs throughout the evening without saying one word to their parents or each other. Parents were singing and dancing, but didn’t seem to share the experience as much as living it separately… Their picnic consisted solely of “food” out of foil bags.

As you can see from the pictures, Dane enjoyed it very much and blabbered on for at least an hour after coming home about this that and the other he’d observed at the concert. So it was definitely worth it!