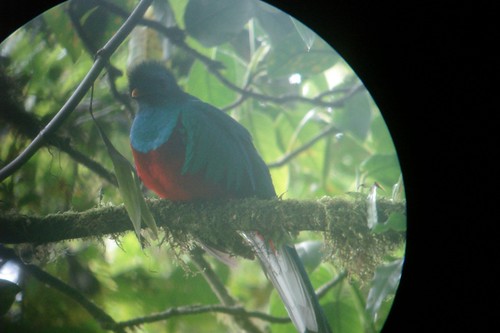 We had heard and read about the rare resplendent Quetzal before we took our tour of the cloud forest. And as they estimate that only 50 pairs are breeding in Monte Verde’s cloud forest, we hadn’t imagined seing more than a fleeting glimpse of this incredibly beautiful bird. But again we were so lucky – our guide spotted a beautiful male perched on a branch no more than 20 meters away, maybe less (I’m no good at estimating weight and lenght and that sort of thing). Anyway, we could see it clearly with the naked eye and close up with our binoculars and with the guide’s telescope, through which the above photograph was taken.

On the three hour trip we also saw a number of different colourful hummingbirds (very noisy birds! I’d never have imagined), a rather large tarantula (asleep in its hole, luckily) and a number of other birds and dozens of different orchids and other exotic greenery.

In the afternoon it was time for our visit with the Monte Verde fair trade spokesperson Guillermo and his family. His beautiful, charming 14-year old oldest daughter Maria showed us the way – in 100% perfect English, since Guillermo and his wife Ana have their children in the Quaker school, where they are taught a number of classes in English. We share many values with the Quakers, catholic Guillermo and Ana told us. Well, we do too!

Ana is a gifted artist, who paints, does ceramics and mosaics and has left no part of their intriguingly beautiful home untouched by her magic. There are no pictures – you must imagine it. We were treated to home baked bread and – of course – coffee. We had a lovely time and probably overstayed our welcome… 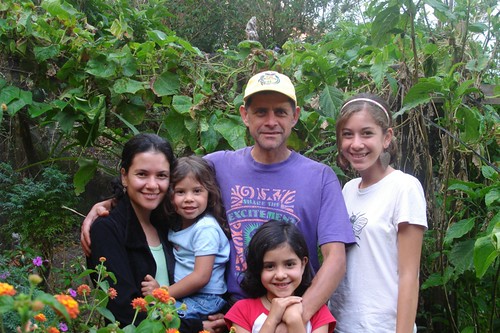 The next day we followed the bumpy road down to the Guanacaste peninsula towards our next destination: Tamarindo. The town of Tamarindo, sitting on the most beautiful stretch of beach, a surfer’s dream, is on the brink of over-development. It’s brimming with American tourists and surfer bums and on every street corner, somebody is trying to sell you a time share apartment.

The hotel our travel agent had provided turned out to be quite awful, which was a surprise, since the other two 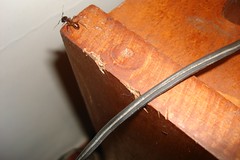 hotels had been so nice and we hadn’t been warned that this one was below standard. Not only was it practically ON the extremely dusty and noisy road, the rooms were tiny, had no space for clothes, let alone 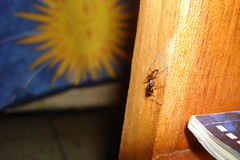 empty suitcases. There were around 10 worn-out plastic chairs scattered around the minuscule swimming pool and the so-called children’s pool was the size of a large bathtub. But that was the least of it – the room was filthy and it was full of very large ants. They were everywhere, litterally. So we checked out. And are now at the lovely Capitan Suizo where we were lucky to get their smallest room (considerably larger than the other one, though) at a very good price. And that includes impeccable service, a beautiful garden full of exotic animals, a huge swimming pool and breakfast. And very, very friendly and competent staff. 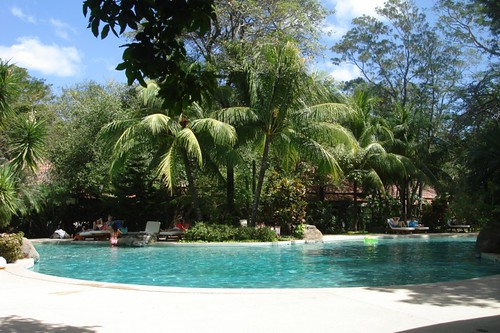 As Tamarindo isn’t really our kind of place, we spend the most of our time by the pool or walking along the beach in the surf. Which isn’t at all bad… Both Dane and we enjoy the fantastic wildlife in the hotel’s garden. 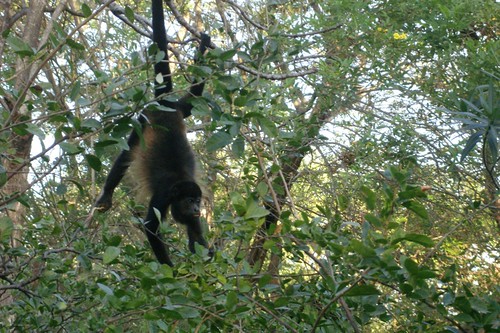 A howler monkey. A flock of them are always around the hotel and have the kindness to wake up the guests around 6:30 in the morning with their unmistakable howling. But they are such fun to watch. 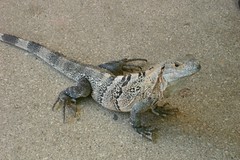 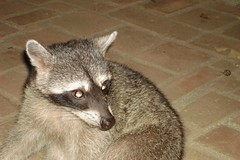 The iguanas are all over the garden and after a day or two you stop getting near heart attacks every time one of them comes hobbling down the path. They climb the trees but aren’t that good at it, so regularly you hear a big thump and it’s one of the iguanas, which has fallen out of a tree! A couple of raccoons can be seen every evening and they are practically tame, as are many of the birds here. It really is heaven for children! 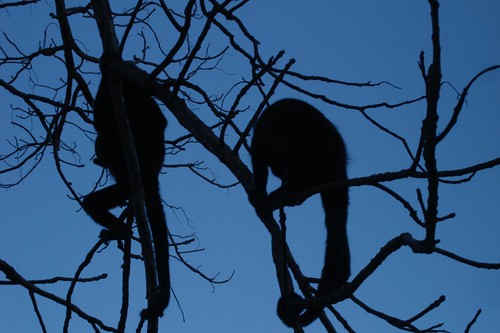 A couple of howler monkeys silhouetted against the evening sky.