With our heads in the clouds

Monte Verde is so high up and so inaccessible that it’s a miracle anybody ever thought of bringing tourists up there. But luckily somebody did.

On the way there, we stopped at a tiny restaurant perched high up on a hill. The menu consisted of fried trout with yucca fries, pinto (the local mixture of beans and rice) and sugar cane juice. The owner had the trout in a dam behind the house and went out and caught a couple for our lunch. His wife cooked them and peeled and cut the fries while we watched. We also got to make our own sugar cane juice on his machine, which he’d inherited from his dad and granddad; he proudly announced (via dictionary) that it was more than a hundred years old. The restaurant is called Florida (Flo’rida) and we warmly recommend it, if you ever take the trip from Arenal to Monte Verde. 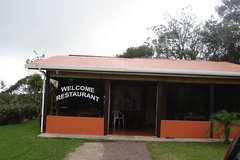 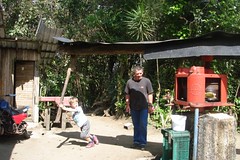 Monte Verde is famous world wide for its cloud forest. A cloud forest is a rainforest high up in the mountains, which is almost constantly covered by clouds. Because of its very special climate it is the place on the earth with the biggest bio-diversity. You’ll never have seen so many ornithologists (elderly men in safari outfits with huge binoculars, cameras and heavy bird books).

The road up there is beyond description. We’ve tried to document it, but you can’t really. Try to imagine the worst gravel road you’ve ever travelled. Then imagine that it’s filled with rocks of all sizes. Finally imagine 2-3 hours of driving like that… 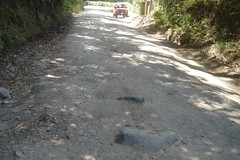 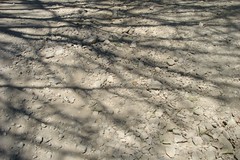 Getting there, we were most pleasantly surprised by our hotel, which was quite lovely and where exotic birds and animals let themselves be seen and photographed in the garden. 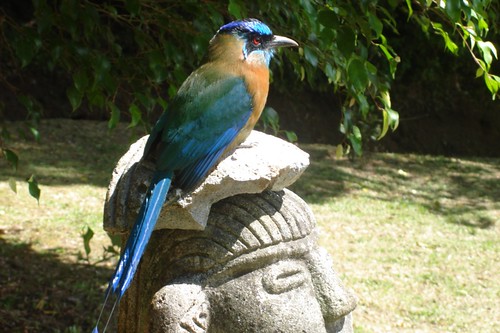 On our first day we went on a so-called coffee tour. Dane and David weren’t overly exited, but most of you know what I’m like when it’s something with coffee, organic, fair trade… So I insisted. Our guide was a soft-spoken, quiet man with a mission. Guillermo is the spokes-person for the Monte Verde coffee Coop and has travelled as fair trade ambassador to UK, Scotland, Ireland, New Zealand and Australia. So obviously his English was excellent.

It was just us and Guillermo and we began by driving to an overlook, where we could see the entire area and all the way to the Nicoya peninsula (jutting out into the Pacific). Up here Guillermo told us about the history of Monte Verde, which was “colonised” in the 50ties by a couple of handfuls of American Quakers, fleeing the Korean war. Read the interesting story about the opening of this remote nature’s wonderland to people from outside here. 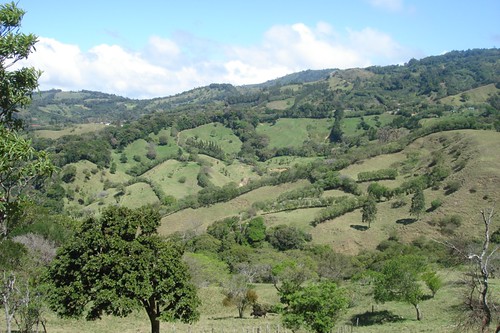 Then we drove to Juan’s organic coffee plantation. It was quite small and didn’t provide much of a livelihood for Juan, his Quaker wife and their two daughters, but with the eco-tourism on top, he could make a decent living. As you can see, Dane was an avid coffee picker. However, he was stunned to hear that a coffee picker only gets around 2$ per bushel coffee beans. It’s a bushel you see in the picture. 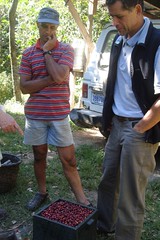 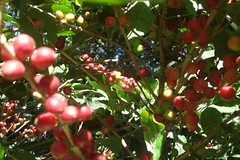 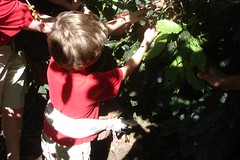 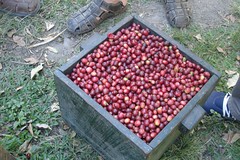 Everybody in Monte Verde has a “kitchen garden” with some banana palms, Papaya trees, pineapple, avocado, guava, watermelon etc. and we got to admire Juan’s. By the way, did you know that a banana palm, which can grow to around 4 meters, only lives one year? It shoots out of the earth, spouts around 100 bananas and then drops dead, within one year. My jaw dropped, hearing this while standing among Juan’s banana palms. After the tour Juan treated us to a cup of coffee and a home baked cake on his porch.

Then we drove on and saw the place where the coffee “cherries” as they are called, are transformed into lovely-smelling coffee beans. And finally we drove down to the co-op café and tasted the coffee, light roast, dark roast and natural. 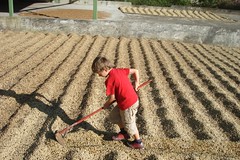 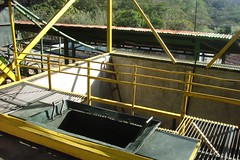 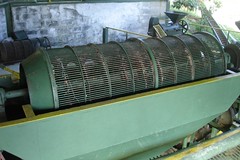 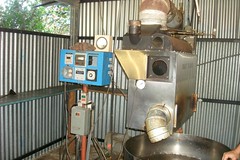 1) Dane is turning the beans over. They dry for ten days in the sun and must be turned over 4-6 times a day. 2) The coffee cherries are poured in here with water from the river. 3) this machine sorts the beans in sizes. 4) Here’s where the coffee is roasted.

2 tanker om “With our heads in the clouds”

forrigeLiving under the volcano
næsteThe Quetzal and Costa Rican hospitality