The day before Emil and Ida’s arrival, we drove up to the Point Reyes National Seashore. It was a wonderful day with a good deal of hiking (to allow for the food and goodies over Christmas) and fantastic sights. We started out at the visitor’s centre, from where we took the short earth quake hike and the slightly longer hike to a remake of an Indian village. I’m afraid I’d let Dane to believe that there would be a big hole in the ground at the epicentre of the 1906 earthquake. Well, there wasn’t. It had been filled years ago. But there had been a fence, which had been split by the earthquake. This fence had been maintained ever since, so we could see how far it had moved. On the picture you can see me showing Dane the distance between the posts and explaining that I’m standing right on the San Andreas faultline, where the ground split open. 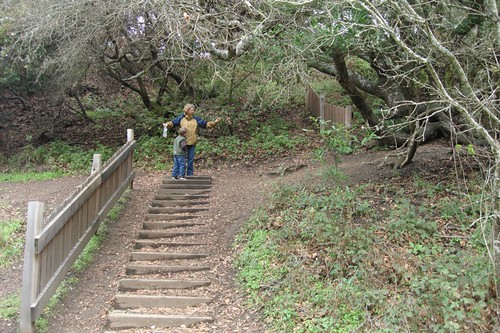 The Indian village even had a herb garden with good explanations of what the Indians used the various plants for. There were teepees for sleeping, food storage etc. Their staple food items were acorns and whatever could be salvaged from the Pacific. The acorns were ground into meal, which was then made into a variety of food stuffs. 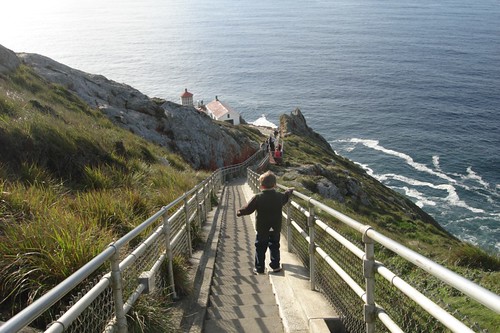 Then we took the long, but very scenic drive to the Point Reyes lighthouse. It was 18 miles of up, up, up till we reached the very tip of the peninsula. Then we parked the car and went up again, this time on foot. Only to reach the top, from where the lighthouse is 302 steps down. Going back up corresponds to walking to the 30th floor of a highrise. But it was great fun and good excercise.

After that we drove to another vista point, the Chimney Rock, to watch the sun set over the Pacific. Before the sun set, we saw elephant seals down on the beach. What a peculiar creature! 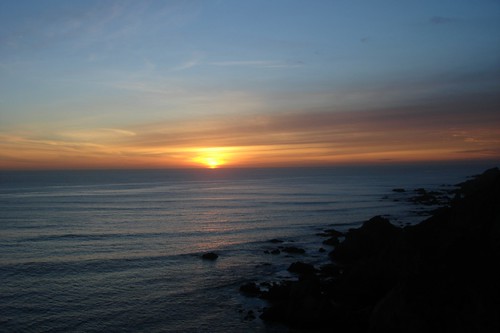 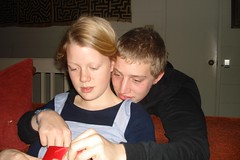 We’d spent several days of serious Christmas shopping, so we were well prepared, when we could finally drive to the airport and pick up Emil and Ida in the early evening of the 24th. It was great seeing them and we had a really nice Christmas together. They had had a real Danish Christmas dinner with Ida’s mother on the 23rd, so we settled on a leg of lamb with all the trimmings. I love the Danish duck with red cabbage, sugarcoated potatoes and everything, but David and Dane don’t fancy it much, so there really wasn’t much point. The weather was great, so we walked down to the town and along the waterfront before dinner. 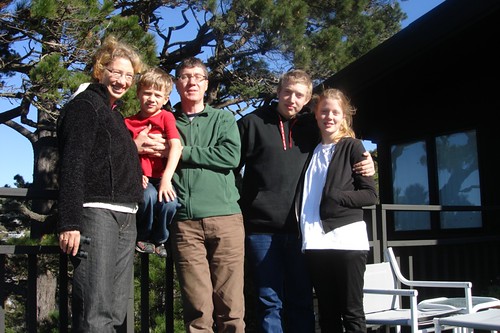 The following days we went to the top of Mount Tam (again) and took the boat to San Francisco. Today the four of them have gone fishing, while I’m in the local library writing this and researching for the next leg of our trip.