It’s now past 4 am and Obama just passed the magical 270 electoral votes. So I go to bed now. Horrible headache, happy headache :-)

I’ve settled down now in my sofa with everything within reach and BBC News on the telly. My computer is at hand and so is my Iphone. Luckily most of the key states are on the East coast, which means the results will be in around 1 am. Should one or some of Virginia, Pennsylvania, Florida, Ohio go to Obama, then I will almost certainly go to bed, assured that America will have a president who will unite rather than divide come January. That’s what he’s been promising all along and I choose to believe that he will do his best to deliver that. I remember reading an analysis of his political statements in The Atlantic back in December last year, thinking that this man could recover USA’s standing in the rest of the world and make an end to the aggressive foreign policy we’ve witnessed for so many years now. And won’t that be something! I really and truly love America – it’s such a fantastic country. It would be so nice to also harbour some respect for the man in the White House. 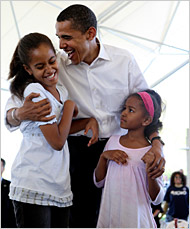 I think I’m pleased… Read an excellent portrait of Mr. Obama in the New York Times.

These last days we’ve (me mostly, and David) been watching CNN all day and night long to follow the so-called Iowa caucuses. That’s the pre-elections if you will, among the presidential candidates from both parties. First state is Iowa and that is of course why it’s so important.

The republican candidate who won tonight was Mike Huckabee. I had not even heard of him, when we arrived in the US and I’m pretty sure many Americans hadn’t either. And the democrat candidate who won was the black outsider Barack Hussein Obama. And Iowa is really a very white, a very religious and a very republican state. Those two candidates have very little in common. But they do have one thing: They both speak warmly about a UNITED America – united across the dividing line that has defined American politics for many, many years, a line that started widening badly during the Clinton administration because so many republicans hate him and hate Hillary so much, and which has grown so, so much deeper during the Bush administration, because of the Iraq war.

Even if Huckabee is VERY Christian and is against abortion and speaks about no sex before marriage and all sorts of things that I so not agree with, he said something very beautiful in his thank you speech in Iowa. He quoted someone, I didn’t catch who, but said: “War is not about hating the people in front of you, but about loving the people behind you.” And he drew on that line to talk about how he wanted to unite America across the divide.

Obama’s thank you speech was marvelous – I’m sure you can catch it on one of the networks’ websites or on Youtube very soon. Obama also speaks constantly about healing America and it’s self-confidence. He said: “It’s not about a group of blue states and a group of red states – it’s about the United States of America.” (Quoted from memory).

I’ve just read an article in Atlantic Monthly which elaborates on why Obama can unite America. You should read it… I like Hillary, I always did. But she looks old and worn – not as an old woman, but as an old hand –  and she repeats herself in her speeches.

And why is this so interesting to us Europeans. Well, surely that’s obvious. The president of the United States is half president of the world. What he (or she) does, the signals he (or she) sends, influence us all. If America’s economy doesn’t start to fare better very soon, that is going to affect us all. And if America doesn’t soon start working on healing the wounds in the Middle East rather than deepening them, we’ll all be in trouble. You can continue the litany yourself…

And a bit about us. We’ve been somewhat under the weather with both Emil and me suffering from relatively bad colds. Emil being hit the hardest, lying all of New Year’s day with a high fever. He’s better now, luckily.

Due to the above our New Year was quiet. We had nice food, watched a good film on the computer and toasted in tiny glasses of sparkly to a more peaceful world. It was certainly very peaceful outside our windows, no fireworks whatsoever. Pretty strange – don’t think I’ve ever experienced a New Year without fireworks before! But we watched one million people celebrate in Times Square in New York. They certainly had lots of fireworks!

Today we drove in to San Francisco and parked in San Francisco Museum of Modern Art’s parking garage. I can recommend that. It’s not exactly cheap, but neither is the ferry. And it’s very central and probably fairly safe. We went and saw an exhibition with Olafur Eliasson, which felt very close to home. David and I liked it a lot, Emil and Ida weren’t so impressed. We also saw an exhibition with an American artist I’ve never heard of before. Joseph Cornell. Very refreshing, very inspiring (particularly to Dane, who’s produced four boxes since we got home…) and very thought provoking. So all in all a very nice day at a very nice – but surprisingly small – museum.

Tomorrow is election day in Denmark. We’ve had the right to vote for more than 150 years and too many Danes take that right for granted. However – it seems to me that even more Americans take it for granted. So granted that they don’t even bother to vote. Here you have to register to vote – but compared to how difficult it was for a black voter to register in the deep south of the fifties for instance, it’s not that difficult. But I guess, that when you don’t read a newspaper -and I’ve heard and read several times that many Americans have a good reason not to read a paper, the reason being that they are almost illiterate – and only watch the news, or what passes for news, on the local Fox channels, then you may easily lose any interest in voting.

And that’s so, so sad. Because it’s such a core right in a Democracy – think China, Burma, Iran etc. – and I’ve heard many people say: “Oh, I can’t be bothered, they are all corrupt anyway” or “It doesn’t make any difference to me, they are just thinking of themselves, all of them”. And both statements may have more than a little truth to them. But does not voting change that? NO NO NO!

So go and do you democratic duty: Vote!

And to my Danish friends, family and readers who happen to live in Copenhagen. If you haven’t made up your mind yet, then vote for my good friend Charlotte Fischer. She’s honest, hard working and most certainly not corrupt. So there…