The guidebook told us that Harrisburg, the state capital of Pennsylvania, is “not the most exciting place”, so we just passed it on the opposite side of the Susquehanna River, the bank of which I’m sitting, while writing these lines. The weather right now is probably the balmiest I’ve experienced in all my life. The gentle wind is like a caress of the skin, it’s warm, but not hot and the air is crystal clear, the way it only ever is in autumn. It was pretty cold last night, however, and the locals tell us, that today will be the last day with this unusually warm and pleasant weather. We’ve been incredibly lucky with the weather on our trip, don’t think we don’t appreciate it.

Instead we went to Gettysburg, this most historic of places in America. It had this incredibly corny museum – the American Civil War Museum – that had David and me glancing incredulously at one another. Out front are scores of American flags and the entrance is very majestic. Inside is – a huge souvenir shop… Slightly bewildered, we went to the counter and asked about the museum. The elderly but very brisk lady at the counter brushed us off – there wasn’t enough time, since they were closing at five. It was 4:15. We insisted and got our way. We were ushered into the museum, which turned out to consist of a parade of displays with tableaus of life-size dolls in various vital episodes preceding and under the war. And at the end of this – TADA – we were again ushered by same steely-gray-haired lady into an amphitheatre with a huge display of the same life-size dolls, this time depicting the entire battle at Gettysburg, including a scene where a soldier has his leg cut off by the field surgeon. With a film and educational voice-over in the background, the display was lit up a little at a time and suitable music played. The grand finale was when a display of sinister men with Lincoln in the foreground came rumbling up from the basement and the Gettysburg address came booming out of the loudspeekers.

Some of you readers might be too young, but others will remember oldfashioned department store mannequins and their weird expressions and glassy staring eyes. That’s what they looked like. It was good for Dane, though. A more European style museum may have been less interesting and less informative in his view. Bill Bryson often writes about American museums and how good they are. In one way he’s right -they are good. Because they are simple and play up to the television way of percieving things – perfect when you’re with an endlessly curious child. In another way he’s not. They are annoying, because they seem to believe that I’m a complete ignorant and need to have everything explained to me as if I were a dimwit (no comments, please).

After that we crossed the road to the enormous Gettysburg National Cemetery. Originally being the burial ground of the many, many union soldiers who died here during the three day stand-off (the confederate soldiers were all taken home and buried in the South), it has since become a burial ground for soldiers, who died in later wars. There are litterally hundreds, maybe even thousands of little stones for soldiers who perished in WW1 and WW2. But also in the Spanish-American war and in Korea and Vietnam. It is a solemn but very beautiful place. 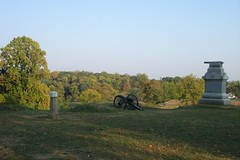 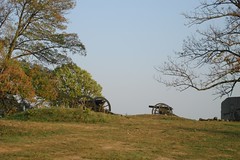 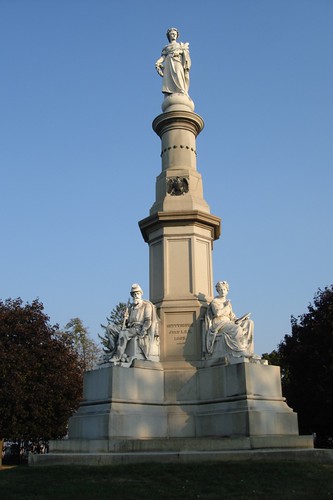 It was also here, a few years later, that Lincoln delivered the aforementioned address. 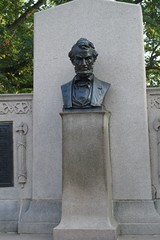 For that night we hadn’t booked a campsite. Among the little advertisements on the town map, Dane found one that he thought looked very promising. Since it was only a mile away, we went for that. It was huge, the amenities were mediocre (would probably have been better in the summer) and miles away from the site they gave us, which had nothing all the other sites we’ve been on didn’t. And it was the hitherto most expensive one. What a disappointment! On top of it being ridiculously expensive, it was also the first site, where we had to pay seperately for the Wi-Fi. A total rip-off.

The contrast therefore to the campsite we’ve been on since yesterday, was stunning. This one is small, totally humble, with few but adequate amenities, free Wi-Fi (which actually works without me having to wave the computer at the signal), extremely nice people (a couple who owns the place) and an absolutely sublime location. We’re on a small island in the Susquehanna River near the town of Sunbury. And the camper is parked, so that this was the view from the “bedroom” window around 8 o’clock pm: 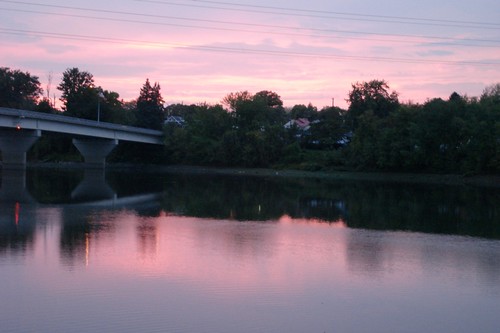 And here’s what I’ve been looking at all day, from the very comfortable perspective of a deck chair in the sun with either book or computer at hand: 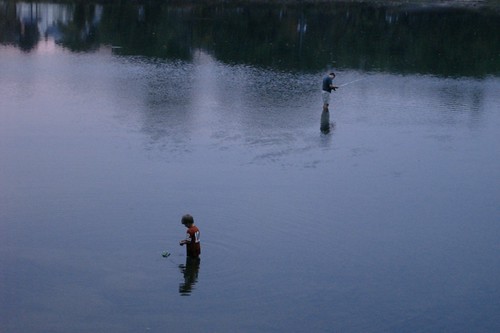 When at dusk I finally lured them out of the water, we had dinner outside by the fire. It was just perfect! David only caught a single fish (small-mouth bass according to camp owner), but doesn’t seem to mind, as long as he can stand out there all day and enjoy the scenery. David and Dane both had the pleasure of seing a beaver – it had a little dam at one of the riverbanks a little way up river. I missed that one.

Tomorrow we will be going east into the state of New York. Now it’s only a few days till we’re picking Emil up in Boston’s Logan airport (Sunday). We’re all looking forward to spending a week with him. He is also an avid fisherman, so the three of them will probably drive off to some distant river and leave me to a day of shopping in Boston (or is that perhaps wishful thinking?).

forrigeWe have officially left the South
næsteGuess where we are!